Full confession: I was not really that excited about the Beauty and the Beast remake. Like most children of the 90’s, I grew up watching the Disney animated original. I even owned a VHS copy. As I’ve gotten older, though, the story of Beauty and the Beast has become increasingly problematic for me.

Intelligent, independent woman who likes to read is misunderstood by her small, provincial community. Good.

Said woman sacrifices herself and her well-being to save her father’s life. Admirable.

Woman refuses to cave to the angry demands of her captor, subverts them to survive, and charms the rest of the household. Heck yeah.

Woman falls in love with the angry captor (after he violently lashes out at her) and because her love is so strong, she softens his anger and changes him. WHAT!?

I had reservations about the film, but then I found out Emma Watson was playing Belle (and throwing away Belle’s corset!) and then I found out that Disney had written LeFou to be the first gay character in a feature length Disney film. Controversy ensued. Boycotts were called for. I bought my tickets.

One of the strongest themes in the movie is that love and goodness are often found in the most unlikely places. “Be careful not to judge on appearances” the Enchantress warns in the beginning of the film, but the 2017 remake carries this theme beyond just physical appearances and into economic dimensions as well. One of the most intriguing characters in the film is Agatha, the town hag. On several occasions, Agatha’s plight is centered. She is old, unmarried, and devastatingly poor. She is either the object of the townspeople’s charity or their scorn, and we find out midway through the movie that she is so ostracized that she even lives out in the woods away from the town. Yet, it is Agatha who comes to Maurice’s rescue when Gaston leaves him to be eaten by wolves, tied up, beaten, and alone. Again, it is Agatha who defends Maurice’s claims against Gaston in the tavern. In the end, we find out Agatha is actually the Enchantress who cursed the Beast. Appearances are deceiving, indeed.

Like I said, as I’ve gotten older I’ve increasingly had more concerns with the story of Beauty and the Beast (and really, princess-narratives generally) and these concerns existed long before the 2017 remake. 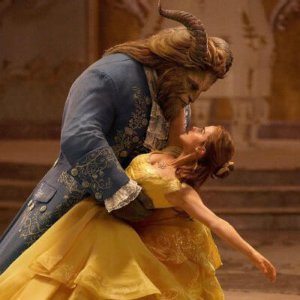 In the United States today, one out of every three women will be assaulted or abused by an intimate partner in her lifetime, and one out of every fifteen children are exposed to domestic violence in their lifetime. Abuse and assault are not issues that a few people deal with “over there” — we all know someone who is or has been a victim, whether we realize it or not. With this social climate, is it really wise to tell our children stories about loving a beast and your love being enough to overcome and change their anger?

Perhaps the Enchantress should have cast her spell so that if the Beast had not found a therapist and an anger management support group by the time the last petal fell from the rose then he would remain a Beast forever. That would have been more healthy and realistic, but no one asked me when they were writing the script. I digress.

So what about LeFou? What should, especially parents, make of Disney’s first on-screen gay moment in a feature length Disney film? First of all, I don’t really care what movie we’re going to see or who made it, there is a narrative at play and I’m going to talk about the implications of that narrative with my child. Stories shape our consciousness more effectively than almost any other force, and visual storytelling (i.e. a movie) is a powerful medium. Content matters, but often we consume narratives uncritically unless there’s something, like a gay villain sidekick, that pushes the nuclear button. Upon going to see Beauty and the Beast parents should be prepared to discuss the film with their children, but not with regard to LeFou. Talk about anger. Talk about appropriate relationship boundaries. Talk about looks being deceiving, and not judging people by their appearances. Ask your child what they notice, and what they think. In all honestly, I doubt Beauty and the Beast will even provide most parents the opportunity to discuss anything regarding homosexuality or marriage equality with their children because the big, “exclusively gay” moment is so fleeting and so subtle if parents blink, they’ll miss it, and it will almost assuredly go over children’s heads.

If social conservatives want to boycott a film, they have every right to do so, but please, if you’re concerned about family values then perhaps you should issue your boycott when the woman falls in love with a controlling, raging, verbally abusive maniac instead of when two men accidentally twirl around the dance floor for all of two seconds at the end of the film?

Perhaps it would be wise for social conservatives to take a page from Beauty and the Beast and stop being so blinded by appearances. Society has spent a lot of times kicking LGBTQ people to the outskirts of town, publicly rejecting them — like Agatha — and all too often Christians have played the roll of Gaston, egging on the crowd as people are shamed and cast out, and then chiming in with that one, final crushing insult.

Rather than boycott, perhaps we would be wise to repent of our fury, and thoughtfully engage rather than hurling insults across the internet. I am constantly learning from — and hearing God speak through! — my LGBTQ+ siblings in the faith. So instead of signing a petition, or posting a rant on social media, perhaps we should all quiet down and listen to the ones we’ve kicked out of town. As Agatha the Enchantress cautions, appearances are often deceiving, and those we reject may be the very ones who save us in the end.

Reproductive justice. Climate justice. Food justice. Social justice. Append the word “justice” to any other word and you’ve got a ready-made brand platform for niche activism. As cultural forces shape…