Full disclosure: This movie touches on so much, and in sometimes subtle but profound ways, that I can only put a small amount of what I thought into words… and inconclusive words at that. In a way it is like splitting the atom — the amount of energy released is incredible, but to harness it for good is overwhelming.

The more I hear conversations in Bible study, or at church, or among Christians at large I hear an emphasis on Philippians 4:8 when it comes to entertainment; specifically movies and music. Sure people like the non-Christian movies, or have their favorite artists outside of CCM, but there is a discomfort in approaching the “messy” films out there. I once recommended Calvary to a person in my Bible study… the following week was, “So, you liked that movie? You thought it was Christian?” It was not an accusatory question, but the person was certainly perplexed with the idea that something containing vulgarity and violence and a dark ending could encapsulate the Christian ethos.

Why are we afraid of this mess? Isn’t this mess the exact fertile soil needed for new life?

In Bruges is a messy movie: viscerally, spiritually, and linguistically; but interwoven throughout the movie is the predominant question of our relationship to God and each other. This makes sense as Martin McDonagh (the writer/director of this and Seven Psychopaths) is the brother of John Michael McDonagh (the writer/director of Calvary), and although both proclaim to have walked away from the faith, you can still sense their Catholic upbringing permeating through everything. There is a serious wrestling with this loss — with the post-Christian world, and what that means.

Strangely (maybe it shouldn’t be), McDonagh never mocks or derides the faith he has left. He takes time to seriously ponder the implications of its loss and possibility.

As expected In Bruges is set in Bruges, a vacation of sorts for Ken (Brendan Gleeson) and Ray (Colin Farrell), hitmen working for the implicitly criminal Harry (Ralph Fiennes) who has sent the two there after Ray kills a child in the botched hit of a priest. As the movie progresses through aimless wanderings between modernity and the historic, we watch Ray struggle through the guilt he carries, unsure of whether or not to move forward in hope or deal in self-retribution for his sin. Ken acts as both guide and vicarious parent, hoping that Ray’s redemption could bring some to his own life. Eventually we learn that Harry’s intent was to give Ray a final vacation, and Ken’s presence was less supportive and more homicidal.

The thing about McDonagh (especially in this and Seven Psychopaths) is that he doesn’t make anything too heavy-handed. Are there moments that hover above the abyss? Certainly, how can you not when dealing with the violent death of an innocent, or just our nature as fallen beings; but there is also an incredible humor, and a willingness to be insensitive in a candid and honest way (like the “Fat American” scene — just an FYI, there is some colorful language here — or the constant patronizing/befriending of Peter Dinklage [who goes on his own insensitive rant]) that drive at something deeper — sort of like that friend who makes an uncomfortable joke, but is very willing to bring it into the realm of serious conversation. 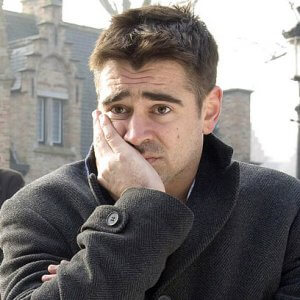 Sensitivity is one of the conventions In Bruges flies in the face of, and humor is the method used to take it head on. The point is that our overly sensitive whims are a cheap commodity. Our offense at something off-color does not do much to sway the balance of good and evil, right and wrong, or the cause of justice… it just makes us seem pretentious (if not a stronger term). Being sensitive to somebody does not make you a good person, and insensitive people can in fact be legitimately good (albeit socially inept at times).

Why does this work? The characters, the ones we like (even Harry) are vulnerable and gracious. They are not in a huff over somebody mentioning the reality of their obesity. In so many ways this is what the Christian community should be on this earth — less hiding behind the PC and more embracing, more willing to stand alongside and deal with the reality each of us faces in both our areas of exception and shortcoming — in this way so many of the characters are able to truly love their enemies.

It is not just the incredible script telling the story with In Bruges. McDonagh seems to alternate from close-up and tight shots, to objective long shot, and subjective long shot. This creates a question of perspective from the outset. The tone of the film is consistent, but what are we watching unfold? Are we becoming intimate with these characters? Are we seeing the world through their lens? Or, are we seeing their lives unfold in the world at large?

Part of the In Bruges experience is the fluid shifts taken with perspective. It creates a true sense of intimacy, of knowing these characters, and of being lost with them in the history of Bruges. The final result produces a sense of something absolute that is just out of reach of our perspective. We are so stuck in our limitations, in conversation, in misgivings, in self-righteousness, and wishful thinking that we miss the totality of the fact that something much bigger is at play, and at play in our very lives.

In the works of both McDonagh brothers there is a constant sense of something lost, and something we are trying to claw our way back to. I would surmise that this unknown possession from humanities past is the connection we once held with God. 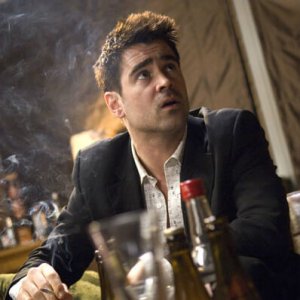 For some reason, in our scientific age, we have taken an explanation of “How” to be homogenous with questions of “Why.” We have narrowed our view; like looking through the small windows of the B & B of In Bruges, we think we get it because of what we observe from that vantage point. We confuse this for objectivity, much like purely scientific reasoning is misjudged for objective fact. There are, however, other vantage points with which we need to see our world.

The film explores this with the constant nagging/challenging of Ken for Ray to get out and explore things with him — be that an art museum, or a historical church. It is the ability to connect beyond the simple observance that drives us from simply “how” something is and into “why” it is.

Christians and the Movie Conundrum

As the Christian community seeks to further sanitize creative endeavors, we miss out on the fertility, the life enriching side of dealing with difficulty rather than suppressing it and slapping a nice lacquer over the top. If you want life to grow there is no way around getting your hands dirty, and that is exactly what In Bruges does.

It seems that the Christian community is often caught in the conflict of perception, but not the perception of a people redeemed, rather the perception of a people who are squeaky clean. And the reality is the squeaky clean ones yell “Shit!” just as often as any non-believer when they drop a hammer on their toes. The difference is we feel the need to hide this reality, rather than bear it forth to Christ. Why do we seek to conceal sin, when we ought to bring it to the only one who knows how to dispose of it?

Sometimes I think we have this weird desire to not “get caught,” to not let anyone find out that we actually do act a certain way; but if I hide what needs to be healed from the great physician how am I to be made well? Watching In Bruges brings to light our failings, my failings, the world’s failings; it does not revel in and glorify them, but wrestles with what this means in the here and now, and equally the hereafter. We need movies that acknowledge and carry sin to the light instead of hiding it behind smiles and gosh-darnits and false altar calls to Barbie and Ken doll salvation.

Brian graduated from Wisconsin Lutheran College with a degree in English-Literature. He is a closet novelist and story writer, a husband, and father to three.

At Cinema Faith, we wish we could provide feature-length reviews for every movie that hits theaters. Unfortunately, some films fall through the cracks. Welcome to another edition of Mini-Review Roundup…