As a child of the 90’s, seeing Ray Romano’s name headlining a movie in my Netflix cue filled my mind with expectations of the laugh-out-loud, “oh my word, at least my family isn’t this bad” brand of humor which shot Romano to celebrity status. It was a lazy Saturday night, my daughter was away on a weekend retreat, and my spouse and I, equally filled with comedic expectations prompted by our childhood memories, eagerly clicked to watch Paddleton, a Netflix original movie.

Paddleton opens slowly. Romano and co-star Mark Duplass are quirky, single men who live next door to one another in an apartment complex. Their friendship is based on a shared love for pizza, puzzles and Kung-Fu movies, and a shared disdain for small talk. The two have spent enough hours watching their favorite Kung-Fu film that they quote along as they watch. After the pizza-puzzle-movie routine, they head out to play paddleton — a game invented by Romano’s character that is the sandlot equivalent of racquetball. Life is simple and predictable, until it’s not. Isn’t that the nature of life? 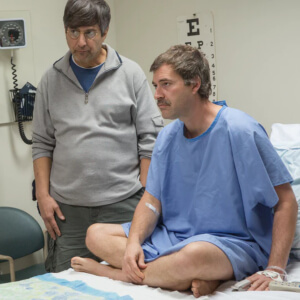 Duplass’ character is diagnosed with stomach cancer, and his prognosis is not good. The two friends pick back up on their routine: pizza-puzzle-movie-paddleton in understanding silence. The dialogue is limited, but anyone watching who has experienced a similar moment in their own life can fill in the internal conversation rushing through Romano’s and Duplass’s characters minds. The unthinkable has happened, and Romano and Duplass somehow find themselves still walking, eating, playing and breathing as they were before, but words can’t reach into this new reality just yet.

Duplass’ character decides after consulting with his oncologist to end his own life before the cancer inevitably kills him. He needs help administering the drugs, and asks Romano to be the one to be with him when the time comes. The closest pharmacy that will fill the unconventional prescription is several hours away, so the duo embarks on the most somber road trip of their lives.

The Risk of Love

What ensues is the most heart-wrenching cinematic work I’ve ever seen. Though their circumstances are extreme, Romano and Duplass draw the viewer into emotional complexities so many of us are familiar with in life, but rarely give voice to. How do you love someone well and be present to them through pain? What does it look like to grieve someone’s absence while they are still with us? How do we face unexpected change? Why are there so many damn unknowns in life in the first place? Why do bad things happen to good people? Can’t we just continue on as things were?

The end of the film is breathtaking, not because of something miraculous, but because we are invited to look into the most intimate moments of grief and loss Romano’s character has faced, and witness as he somehow lives through it. Leo Buscaglia wrote that “to love is to risk,” and Paddleton invites us to consider the love that enlivens the closest friendships in our lives. It is an unassuming risk built over frozen pizzas, jigsaw puzzles, and Kung Fu movies, but it’s a risk that can bear the weight of a terminal diagnosis when the time calls. At a time when news about our increasing disconnection as a society is on the rise, Paddleton is an ode to the power and strength of ordinary friendships when we trust them enough to let them move us to extraordinary lengths.

Our audio equipment failed us in October, but we’re back and better than ever. Welcome to our first double feature podcast! That’s right, this month you get two movies for…