To begin with I must confess that I am a pastor who is a huge fan of science, especially physics and theoretical future science, which also makes me a pretty big geek on sci-fi movies. Secondly (or fifthly), I’m also incredibly fascinated with the thought of artificial intelligence. That is – the possibility of “robots” that achieve some level of self-awareness or intelligence through programming. Sci-fi movies go just a bit further to call this intelligence “consciousness.”

What is so fascinating to me about AI is that it seems to me that the most logical outcome of the creation of AI is the imminent destruction of humanity. Many scientists and futurists have pointed this out, and this thought pattern is encouraged by a multitude of movies from The Matrix to The Terminator and even recently in The Avengers: Age of Ultron. If you ask me, I’d agree: the destruction of humanity seems like the most logical outcome of AI…but that’s not the point of this article, thankfully.

What I am encouraged by is the recent release of several films that are not simply aiming to use AI as a backdrop to a blockbuster that just thrills through action and destruction, but rather are using AI as an examination of what it means to be human. The new series Humans on AMC just concluded season 1 and is giving a compelling look at the interaction between humans and AI robots, but the most gripping look at this issue that I’ve ever seen comes through Alex Garland’s recent directorial debut Ex Machina.

Ex Machina has a tension weaved throughout that puts you on edge which reminded me a bit of my experience watching The Shining. This may simply be the sense of isolation and claustrophobia the film produces because of its remote setting or possibly because it only has 4 characters in the whole film. Regardless, the film builds the sense of isolation as it takes place in a remote laboratory “bunker” somewhere in nowhere Alaska where the lead character, the young, brilliant and super machismo Nathan (who is likened to the creator of Google), is working to develop Artificial Intelligence. 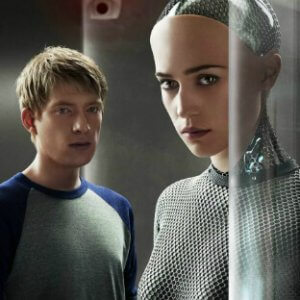 He brings in another young programmer who works for his company, Caleb, to question and test his robot, who is named Ava, to see if he can truly determine if Ava is just a series of creative programming sequences or if she is truly self-aware. Through Caleb’s interaction with Ava, the tension reaches a fever pitch as questions of love, sexuality, manipulation, freedom, self-preservation, property and self-awareness all take center stage. In one of the most compelling scenes in the movie, the unprecedented situation even leaves Caleb existentially questioning if he himself is a human or a robot.

Along the way, Caleb discovers that this robot Ava is simply the latest creation from Nathan and that Nathan has an incredibly dark side to him when it comes to how he interacts with his robots. The ideas presented in this film are fantastic for a sci-fi loving nerd such as myself, but the visuals and performances were stunning as well. The outcome seems inevitable, yet also a shocking surprise that left me thinking about the film for hours after I finished watching. This is truly a great movie for any genre and an incredible step for sci-fi and the discussion of Artificial Intelligence.

What Does It Mean to Be Human?

But as a theologian, I am left with questions about the AI. While this may seem silly to those that do not care about science, I think questions like the one this film poses will become increasingly common in our future of integrated technology and I, for one, would rather begin the discussion sooner rather than later (or too later).

The biggest question I’m left with is simple, “What does it mean to be human?” Evolutionary science tells us that the uniqueness of homo sapiens is our self-awareness, or the ability to think about the future. No other animal thinks about the future…just us. Therefore, self-preservation is the driving force of humanity. But is that what makes us human? Is there something there, say, a soul? While I would give a resounding, YES!, I don’t think I can completely say what the soul actually is.

Is being human based on our soul or consciousness? Or is being human more of what we do, how we act? Can a robot act human? Truly? Can they be humane, show compassion? And if they can somehow show compassion – understand the consequences of the future and seek self-preservation – then what would make them different from us? Yes, it is that soul question, isn’t it?

Do Robots Have Rights?

And who gets to decide at what point something has the right to live? Although humans may create a masterpiece of technological genius, at any point does that masterpiece then inherit rights to life? What is property and what is life? Is a family pet property for which its owners can do anything it chooses, cast any sort of harm, enlist in any sort of service and “put down” at any point it chooses? Or does that animal have some sort of rights?

Even the Bible gives certain animals certain protections against harmful human behavior. Animals seem to be able to give some sort of love, don’t they? While you may disagree with me, there are many who feel they are loved by a family dog and cannot imagine life without it. What is love if it is not this?

This film is deeply sexual (and deserves the R rating) because, I believe, that is where the AI seems to digress to – sex toys. In my estimation, if life-like robots are created (whether AI or not) they will be initially for service to humanity either through the military, home servants, or sex servants – all of which have at their core, control. We want to create something that we can control and enhance our lives through. This perfectly makes sense…just like us creating smart phones or better computers. But what if one day, these robots “come alive,” gain self-awareness, consciousness and can feel and care about their own future.

We may think this is a far-fetched fantasy of the future but not-so-long-ago humans were not aware of electricity…more or less having all the information of the history of humanity accessible in .058 seconds.

To me, AI is an inevitability of the future – whether that is the near future or a few lifetimes from now. The frightening aspect of AI, which Ex Machina exposes, is not what it means to be artificially intelligent, but rather what does it mean to be human? Humans have this deep desire to seek self-satisfaction in all we do, and the side effect of this is that we often treat other humans as property, denying even their right to life or a desirable future. We deny freedom to those we have disdain for, we seek to siphon off the life energy of those we see as a nuisance or a non-productive member of society. Those in power nearly always seek to maintain their power through violence, manipulation and resource management.

Existentially, we so often see other people as existing for our own benefit. So we use them to get what we want to make our future better. All of which exposes our worship of the false god of self, of entertainment, of satisfaction and selfishness.

These gods trap us, isolate us, and ultimately will destroy us. Just like Nathan, the Frankenstein scientist, we bring about our own demise by lowering ourselves to something less than being truly human.

What does it mean to be human? I think Jesus gives us that answer fully – to love one another, to sacrifice what we have and who we are for the benefit of those around us. To stand up for the vulnerable and marginalized and to seek justice for those that have been exploited. The life that Jesus gives us is the truly-human-life where we live in mutual support and mutual flourishing in a desirable future for all of us. Where no one is property of another.

Yes, artificial intelligence is a theological issue because if (and when?) we manage this technological breakthrough, AI will be based upon a reflection of humanity. We will create them in our image, based in our history, and because of that they will be capable of seeing the danger that our self-satisfying behavior will have on them. 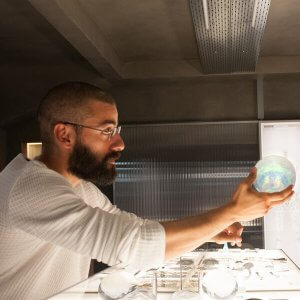 This causes me quite a bit of worry. Being human is difficult. Managing self-preservation with love is hard to say the least. Living in a culture that teaches us to control, manipulate, consume and disregard life causes us so much pain, but yet, to many, seems like the purpose for our existence. The ability to consider the future is often frightening and a responsibility we often wish we did not hold.

It is hard to be human.

Caleb, the naive test subject in Ex Machina, remarks to the brilliant programmer when seeing the beauty of his creation, “If you pull this off, you’ll be like a god.” I think most of us would like to be gods. Don’t you think?

We so often want to control everyone and everything around us, and often times dictate to others who has the right to life and who is just our property. Humans have a long and dark history of slavery, of denying women equal rights and even looking down upon those with a different racial, economic, or sexual orientation to us. We seek to control these people by denying them free access to their desired future.

We have considerable trouble treating each other well.

How we treat life – human life, animal life, environmental life – reflects what we believe about God and in turn has a profound affect on us. Yes, our actions towards life changes our life and our view of God.

The future of AI may be simply in software or in clunky skeleton robot forms, but I bet we’ll create them to look like us, because our brains find the sight of us pleasing and comforting. I know the treatment of robots has many variables based on a plethora of factors, but…

If we somehow manage to create robots like Ava who look like us, think like us, interact like us, can consider the future and can offer us some level of compassion, then I believe we will have to treat them as life, with rights and a future. I know that sounds very strange, but treating everything with love, respect and compassion is truly the call of Christ upon our lives – the call to be truly human.

Jason is the lead pastor of Transformation City Church in Milwaukee, WI where he lives with his wife and three kids. He is the author of Dangerous Presence: Following Jesus into the City, the founder and president of Exploit No More, and a lover of movies. You can find more of his writing at jasonpbutler.com.

Moonlight is about Chiron. The movie focuses on this boy through three epochs of his life (Little, Chiron, Black) utilizing three different actors to pronounce the difference, all carrying his…