When I was a child the science museum in my hometown hosted a traveling exhibit featuring all kinds of information about the moon, the U.S. space program, and even some samples of lunar rock (which is less interesting to look at when you’re ten-years-old than it sounds). To prepare for our field trip to the science museum to see the exhibit, we worked through a whole unit on space exploration, NASA, and the Moon Landing of 1969. I learned all about Buzz Aldrin and Neil Armstrong — the heroes who landed on the moon — and I knew that if the heroes ran into trouble a call to “Houston” may be able to solve the problem. I never thought about the who of “Houston” or the many scientists and mathematicians who had to work to get Aldrin and Armstrong to the moon. Hidden Figures highlights just a few of those stories — the names long forgotten when we tell the tales of men on the moon.

The stories of three “computers” make up the plot of Hidden Figures: Katherine Johnson, Dorothy Vaughan, and Mary Jackson. Each woman brilliant, and noteworthy in her field for unique and compelling reasons. Hidden Figures demands the viewer reckon not only with the triumph of women long ignored by our history books, but the reasons why they were expunged. 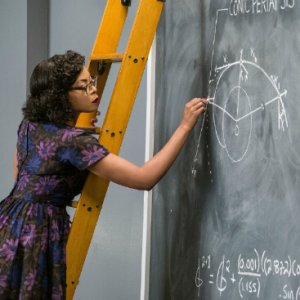 Early in the film, when questioned about their work at NASA by a man, Katherine Johnson corrects him with a swift: “They let women do things at NASA and not because we wear skirts, but because we wear glasses.” Her retort rings true even today when women in the workplace (and even more so science, math, or technology fields) still face sexism and additional scrutiny to the validity of their contributions.

Also a running theme in the movie is the enormity of the Jim Crow south. Dorothy Vaughan — a computer and programmer at NASA — is banned from a public library. Mary Jackson has to petition the court to continue her education in engineering because the only school offering classes is a white school. Katherine Johnson has to run half a mile across the NASA campus to use the restroom. While Jim Crowe has been off the books for several decades now, I couldn’t help but think of the depleted libraries and overcapacity classrooms in the schools in my neighborhood. We’re no longer separate (by law anyway), but equality between races eludes us as a nation even still.

Out of the Shadows

It has been said that the victors write the history books. In the U.S. the narrative of victory is that of the competent and conquering white man, which is perhaps why when I learned about the Space Race I learned about Buzz and Neil, but not Katherine, Dorothy, and Mary. To learn the stories of the women behind the rockets forces us to see not only their excellence and brilliance, but the systems of injustice which pushed them into the shadows for so long.

During these days of sharply competing narratives in our nation, I can think of no story more needed than the stories of those we’ve hidden in the shadows. I think Hidden Figures is one of the most important and compelling films in recent memory, and I hope that other producers and screenplay writers will take note. Now more than ever we need to push back the darkness that has kept these stories hidden for so long, and bring to light both the depth of struggle and the brilliant successes of our history as Americans.

The death of one’s last remaining parent can be impactful beyond one’s expectations. For most of us, it signals the end of the generation from which we learned who we…