Have you ever watched a movie that hit you so squarely it left you without words? I don’t remember the last time I felt that way about a movie. I’ve watched some great films, but discussion seemed so natural and readily available almost before the credits began rolling. I have not hidden my personal sentiments for Terrence Malick’s work. So, forgive my tendency to gloss over what are often legitimate critiques, especially in terms of how accessible his films are. Even for my own sake there is a certain “mood” I need to be in to take in the full, naturally lit glory of his fragmented style. And, as much as I have spoken to the beauty of A Hidden Life to friends it has always been followed with the qualifier: But it is a 3 hour movie. My articulation that follows is not in any way a match for this film. As I said, after viewing it left my wife and I speechless, and these words are certainly in the wake of the fullness that defies expression.

Terrence Malick’s latest film, A Hidden Life, is based on the true life of Franz and Fani Jägerstätter. The Austrian farmers living and working in the mountains on the verge of World War II. The narrative through line is pretty straight forward. Franz is conflicted – how can he pledge allegiance to Hitler, and what he would deem as evil and contrary to what he knows the Catholic Church to teach? The movie builds tension on this choice to not pledge allegiance to Hitler, and the temptation to recant. Spoiler Alert (although, 1) this is a historical movie, is there even such a thing as a plot spoiler? And 2) I don’t know that anyone watches a Malick film for a plot twist): In the end Franz is martyred, and Malick pulls it all together in a way that only he can – this martyrdom truly does feel like victory in the most Christian and upside down sort of way. Or, as Tertullian put it: “The blood of the martyrs is the seed of the Church.” There was something in A Hidden Life that grasped this paradox more clearly, and articulately – albeit, wordlessly – than countless tomes of theology. 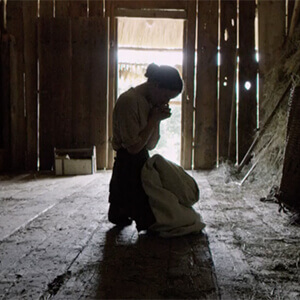 But this sort of simplicity in action has always been the way and the call.

The script itself might be one of Malick’s most linear. It follows a basic four part structure in which we see the good life being built by Franz and Fani. All is well, all is beautiful. They work hard, they love one another, their community is warm and friendly, and their farmland continues to yield all that they need. This is an Eden image, something we would all want, something we would all be willing to sacrifice for in order to maintain. But, there is a growing angst as Hitler comes to power and the town’s mayor spouts a hate-filled rhetoric to stir the community to action and duty.

Franz and Fani remain intact, but the dilemma and the tension of allegiance grows in the second act. Franz seeks counsel from their priest, who feels ill equipped to guide him, so brings him to their bishop. The answer Franz receives is not satisfactory. It is steeped in compromise and a language of lesser evils, clinging to a church built by the hands of man rather than the Spirit of God. And it isn’t that these spiritual guides are “bad” men, they are concerned for Franz, for his life and for his family. There is a desire for what is good, and in so many ways an illumination into the realities of our daily temptations of pursuing these very things in our own culture.

We are always finding ways to compromise and justify, to cling to what we have built rather than relinquishing and aligning ourselves with the greater promise. Are we, as Christians, ready to hate what we’ve built – homes, families, communities – in order to enter into the Kingdom God has built? This is the question Franz wrestles with and answers.

The third act is the onslaught of temptation. He is imprisoned, separated from all that he loves, we see the additional burden this places on his wife to maintain the farm, to raise children on her own, to be hated by the neighbors who once loved them. It is a sober reminder that this choice is both our burden alone, and not. It all culminates with his parish priest and lawyer urging him to sign the papers stating that he will serve. The compromise being that he can be in a non-combat role, he can “maintain his conscience” by not fighting and working in a medical unit. Franz simply asks, “Will I have to swear allegiance to Hitler?” To which he is met with, “They are just words. You will know in your heart where your allegiance lies.” And this is the deep irony of course – if they are just words why is Franz in prison to begin with? It is the great challenge to a tradition that faith alone is what I believe in my heart, and not what is reflected in the life I live. Franz already knows that this is more than words.

And this brings us to the fourth and final act: the cost exacted. The beauty of the movie is that this is not cheap or glorified. This is hard, this is fraught with tension and hope and mystery. We see the pain, we see exactly what it is that is being given up, but we only get an abstract idea of what is being gained. Franz is constantly challenged with: “This is simply pride.” But it isn’t. This is not about arrogance – it is about a hope that goes beyond what the world can offer other than in glimpses. 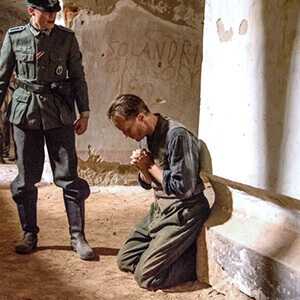 These glimpses are captured visually, in ways that I probably have completely missed, but what I am able to gather were the following:

This is Malick’s most still film. I don’t recall a movie (maybe Days of Heaven, but I’m pretty sure the cuts are much quicker) he has made that lingered in moments and images more often. This creates a different effect at different moments of the film, and is an almost Jobian quality. At times we are overwhelmed by the beauty of cloud covered mountains bathed in light, or the simple interwoven nature of a world in harmony when Franz and Fani take their scythes to a wheat field touched by the wind – the symmetry of all the motion creates a stillness of spirit and an apt metaphor for what is to come.

In other moments, when interspersed between the tension of choice, there is a sense of God’s silence. There is a doubt as to whether or not his goodness is as it was proclaimed when all things were in harmony – where is the restorative justice in the face of great evil? God feels still and unmoved by these things. But, within these moments light and life are constantly emanating. In the prison, a drab and lifeless place there are small plants and weeds growing, there is light shining forth and filling – revealing ugliness, yes, but also giving the warmth of hope.

At first I did not notice this, but after reflecting back, I do not remember a single shot in the film that panned upward and spun. This type of shot seems essential to Malick, to his poetic vision of a world that is dizzying in the presence of God’s vastness. Instead we are overwhelmed and stilled in the awe of majesty dwelling side-by-side with simplicity. There is almost no doubt as to where to move towards, as if the dizziness has been made clear in the stillness.

Dwelling in the Small

Can we even say what a hidden life is in the age of Facebook, YouTube, Instagram and Twitter? This is a world in which my inner thoughts are streaming across your little glowing hand-held companion. A world where connection is digitized rather than humanized. Perhaps this is what makes so much of the cinematography feel transcendent?

I do not doubt this, but what struck me most in this film was Malick’s constant dwelling in the smallness of things. Malick’s films are often a dwelling in and noticing small beauty amidst the grandness of both God’s and man’s creation. These (the different creations) are often juxtaposed with God’s natural world being shown as a source of beauty, light and good. There are times where man’s creations dwell alongside the created world in harmony, but often we see the hideousness of something self-serving, something along the lines of what the Tower of Babel has come to encapsulate. The small moments Malick dwells in, the ethereal effect of hand-held cameras, natural lighting and whispered voice-overs is a homage to small goodness, a harder goodness that comes from a purity of heart. 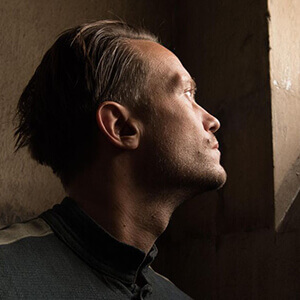 The context is a world at war – yet we do not witness any battles. We are completely removed from these realities and brought to the smallness of a little Austrian farmer and his family. The world is so far beyond Franz’s control the only freedom that can be found is in accepting the limits of bondage, and eventually execution, for the sake of seemingly small goods. It all seems antithetical and upside down, especially in the wake of superhero movies in which what we strive for can be taken, can be fought for, and can be won by our own will and accord – this is winning by surrender. The line that struck me the most was when Franz is asked if he wants his freedom, and chained he looks at his attorney and states, “I am free.”

There is an inwardness that finds itself incapable of not manifesting outwardly in the smallest ways. We are finite, limited, and frail – we are not made to stop wars, we are meant to pick up and place knocked over umbrellas back where they belong, as Franz does. We are made to find our freedom when the world places us in chains. We are made to find life when it is laid down. This is why the film is filled with a deep and reverent Eros – a love-hunger for something beyond. It is mirrored in the embraces of Franz and Fani that are sensual, but not diminished into a desire for bodies – it is a passion that seems to hunger for the whole other person. You see this in the tilling of the soil, the vigor of their work, how their whole being is put into and intertwined with the earth, air and water. You see this as the light bathes the bleak places with a warmth and radiance that leaves no ugly thing untouched, but still carries a mystic sense of ever present Love.

There is no denial of the pain held within this way, but the pain and loss is met and overwhelmed by this love-hunger for that which is ultimate and whole, for the Truth that cannot be put to rest, but will always drive us towards consummation. Whether we are martyrs or motor accidents we will be brought through these very gates of consummation, and we are left to ask: Does our hunger lead us towards the light? Do we carry it with us in all things great and small?

Brian graduated from Wisconsin Lutheran College with a degree in English-Literature. He is a closet novelist and story writer, a husband, and father to three.

It’s been almost 47 years since mankind last walked on the moon. The 1972 moon landing came a little more than three years after Apollo 11, meaning all 12 men…