It was the only day of the year my eyes ever saw 4am when I was in high school: Black Friday.

My cousin, visiting from out of town, and I would rouse ourselves before sunrise, pull on our jeans, slap leftover turkey into a sandwich, and drive to the mall near my grandparents house for doorbuster sales. One year, we spent eight consecutive hours in that mall – and it wasn’t a big mall by any means. We had “shop till you drop” down to a science of sorts.

My family never had much money growing up, but I shopped clearance racks and discount stores like a pro. Head to the back of the store first, clearance racks are always in the back. Look through the whole rack, not just your size as things often get put back in odd places. I could – and did – spend hours and hours shopping when I was a teenager, working the rules of when and how to get the best deals. When I was in college I worked in retail over holiday breaks; the extra money helped out and the 30% off employee discount was one of the best things that ever happened to me.

I volunteered to work the opening shift on Black Friday every year for five years because I loved the energy of that day so much. And after an 8-hour shift (beginning with 5am door busters) I would go out shopping after work. It was almost an addiction of sorts; whenever I felt bad or ugly or stressed I would go shopping. Finding something new and beautiful always made me feel good – especially if it didn’t break the bank.

When I moved to Milwaukee, I had so many clothes that Ben and I could not share a closet. My wardrobe took up an entire closet to itself, two dressers, and a storage bin…and I still had nothing to wear. During our first year here, I started to learn about where all those clothes I owned were coming from, who made them, and the conditions they lived and worked in. I’ve spent the five years since learning as much as I can, simplifying my wardrobe and dramatically changing my buying habits.

When I first heard about The True Cost I didn’t really have an interest in seeing it. I already knew most clothes sold by major U.S. retailers were made in sweatshops, and that many employed children in their supply chains. That information is available in so many places and in so many formats, I wasn’t sure what another documentary on the fashion industry could bring to the table. 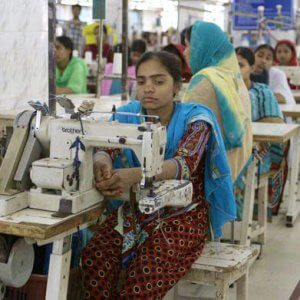 I’m so glad I took the time to watch it though.

More than any other documentary I’ve seen on the fashion industry The True Cost details the extensive implications of our “fast fashion” retail system on human life, family health, child welfare, the environment, global economic systems, and more. Rather than take the approach of other documentaries I’ve seen showing only how miserable sweatshops are, The True Cost presents viewers with a path forward.

Imperative in this path forward is the question posed by British journalist Lucy Siegle in the film: “Why is it that this enormous, rapacious industry that is generating so much profit for a handful of people is unable to support millions of its workers properly? Why is it unable to keep them safe?”

The tension between the size of an industry and the sustainability for its workers is undeniable. According to the Joint Economic Committee of the U.S. Congress, the global fashion industry generates $1.2 trillion – yet those who are producing the garments are often working in factories which need extensive repair and being paid far less than $2 per day.

Beginning with the Jewish law in Leviticus and Deuteronomy, God commands the people to be mindful of those on the margins of society – leaving the edges of their fields for the poor to glean and imposing the command for Sabbath rest on both the Jewish people and the slaves and sojourners among them. This concern for the poor is expanded upon in the prophets, in the life of Christ, and in the actions of the early church.

As people seeking to follow Christ, his example of caring for those on the margins of society should compel us to engage with Siegle’s questions and with the challenging narrative laid out by The True Cost. Perhaps, asking questions and seeking the well-being of those who craft the products we purchase is another way of living out love for our neighbors.

Personally, I have much further to go on my journey, but it is my hope that one day the love I profess for God and my neighbor will be reflected as fully in my buying habits as it is in the pews on Sunday morning.

Politicians, journalists and experts rarely agree, but they have all named the current opioid situation a plague. It’s an appropriate word, with historical and biblical connotations; in every generation, our…