Winston Churchill said “History is written by the victors” and while this is true, I will add “especially if the victors are white, educated, land-owning men.” Rarely are the mainstream historical accounts told by the victors, should they be women or people of a racial minority. While the story of Suffragette wasn’t entirely historical, I appreciated how the thoughtful crafting of the story brought to light things long since forgotten – if not entirely omitted – from the history classes I took growing up.

Suffragette follows the story of the fictitious Maud Watts – a quiet laundress – who gets mixed up in the suffragette movement. While Watts’ character is made up, her story is all too real. In industrialized Britain (or United States, for that matter)  it was not uncommon for low-income women in the workforce to be treated as subhuman to say the least. Workplace treatment ranging from physical endangerment, verbal abuse, sexual harassment, and withholding wages were not uncommon. 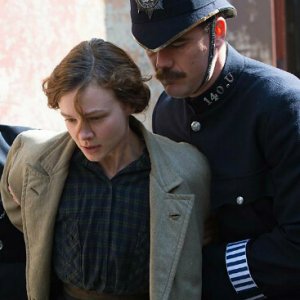 While I’m sure I read about the suffragette movement in history class somewhere along the line, it’s one thing to read about the difficulties of this time period in a text book, it’s quite another to see the heartbreak come to life before your eyes on screen. Suffragette does an exceptional job transporting the viewer back in time, feeling all the anger and heartache of Maud and her compatriots.

I was amazed at the level of sacrifice the women involved with the suffragette were willing to engage in; jobs, marriages, security, safety, family – all was on the line for some of these women. Aside from their voices being allotted a place in the political sphere through voting, other archaic laws were discussed in the film as well – such as a father automatically being granted custody over a child without any sort of hearing or chance for the mother to speak on her own behalf.  At one point, the suffragette speaks boldly in the face of an authority demanding: “You want me to respect the law, then make the law respectable.”

Far from being simply a narrative based in history, Suffragette encourages viewers to think critically and ask questions relative in our own day as well. While women’s rights have certainly come a long way, there is still progress to be made. Violence against women, harassment, and discrimination are still very alive and well. Rather than wait for change to happen, Suffragette made me ask once again, “What can I do to help create the change I want to see?”

Additionally, the acts of vandalism and protest committed by the suffragettes called to mind more recent scenes of protest and vandalism on the streets of places like Ferguson, Baltimore and Chicago.  In a spirit similar to Martin Luther King Jr.’s “Riot is the language of the unheard,” Maud Watts’ character delivers the line: “We break windows, we burn things. Cause war’s the only thing men listen to! Cause you’ve beaten us and betrayed us and there’s nothing left!” Causing me to think, with the state of affairs being what they are in our country, “Who feels unheard? Whom should I be listening to?”

Aside from bringing history to life, reminding me of things I’d completely forgotten since 8th grade history class, Suffragette sparks great conversation that is as relevant today as it was then.

Welcome to another edition of Mini-Review Roundup where we present smaller reviews of several movies at once. Up this month: Novitiate, Hostiles, and Call Me by Your Name.   Novitiate…