Reproductive justice. Climate justice. Food justice. Social justice. Append the word “justice” to any other word and you’ve got a ready-made brand platform for niche activism. As cultural forces shape the meaning of words over time, they risk losing their specificity and sharpness. The word “justice” risks dissipating into a partisan nebula. Depending which side you fall on many ideological questions, “justice” is either the ultimate moral justification or propagandistic virtue signaling. Within Christianity, “justice” is one of the many “Bible words” we must wrestle with: What does it mean in its varied scriptural contexts? What does it say about God? What does it say about the people of God? Micah 6:8, one of the most well-known references to justice, states “The LORD has revealed to you what is good and what He requires of you: to do justice, to show loving-kindness [note: Or “mercy”], and to walk in humility with your God.”

Just Mercy tells the true story of Harvard-educated lawyer Bryan Stevenson. Stevenson launched the Equal Justice Initiative in Alabama in the late 1980s with a government grant, a tremendous Micah 6:8 burden, and not much else. His mission was to work with death-row inmates who were the victims of an over-zealous legal system that was anything but “just.” Alabama in the 1980s had barely moved the needle from its recent Jim Crow past. The same people were in power, the same biases were in play and the same violent bullying of black citizens was the pattern. Unlike many civil rights legal movies, Just Mercy contains exactly zero melodramatic courtroom showdowns, no simmering romance, no white savior and no Klan rallies. Instead, we follow a newly-graduated Bryan Stevenson as he works through his first cases with a focus on the re-opening of the capital murder case of Walter “Johnny-D” McMillian.

I know that the Lord secures justice for the poor and upholds the cause of the needy (Psalm 140:12) 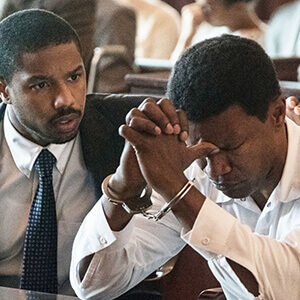 First the film stuff: Just Mercy is a well-made film. Jamie Foxx, as falsely-accused death-row inmate Johnny-D, is full of quiet desperation in every scene. His ability to communicate the soul of a man trapped in a nightmare is moving and intense. It’s almost too tall an order for Michael B. Jordan to act against, but he does an admirable job. Jordan’s Stevenson is composed, affable and hard-working, much like I imagine the real man to be. He’s not a larger-than-life superhero this time (cf. Killmonger, Adonis Creed, Johnny Storm), exchanging the cockiness of recent roles for the humility of a fish out of water. Some of Jordan’s best work reflects his discomfort – either with being the center of attention at a large family gathering, being harassed by local law enforcement or his dawning realization the power of the racist systems he’s up against. Brie Larson rounds out the main cast as Eva Ansley, a local activist who is Stevenson’s first advocate and employee. The supporting cast, lead by Tim Blake Nelson, is excellent as well. Director Destin Daniel Cretton is matter-of-fact in his storytelling with a lot of lingering shots and an almost-but-no-quite documentary aesthetic. Death row prisoners are tightly cropped to reflect their status as caged men and there’s no trendy gimmickry to distract from the weighty material of the story. One of the most effective scenes, an electric-chair execution, is bloodless and replaces shock and awe with heartbreaking stillness. The main points of Just Mercy, that racism and the death penalty are bad, could be summed up in a few words, but by letting the film breathe the audience arrives at the conclusion like a lawyer building a case. All the evidence is laid out and the verdict is inevitable.

Since 1973, 167 former death-row prisoners have been exonerated of all charges and set free. This does not include posthumous exoneration which has taken place up to 100 years after the murder of an inmate. Statistics show that 61% of exonerated (living) prisoners are people of color, and though EJI doesn’t exclusively work with black prisoners, the focus of Stevenson’s initial work was the inequities present in the deep south. Incarceration and capital punishment go hand-in-hand with America’s systemic racism against black citizens. There is an excellent scene in Just Mercy where Bryan confronts District Attorney Tom Chapman (Rafe Spall) at his home. Stevenson exudes controlled calm but, like a storm threatening to break, pushes on Chapman to serve all his constituents. One of the most insidious ways systemic racism works its evil is not through explicit acts but through “sins of omission.” Ignoring black people (especially poor black people) is almost easier than explicitly targeting them (though both need to be confronted). Chapman, who eventually sees the need for justice in Johnny-D’s case, was convinced he was making his city “safe” by prosecuting crime – he was unable to see it was only “safe” for middle-class whites. The black population lived in fear for their lives at every traffic stop, every unsolved crime, every unintentional misstep or perceived slight by a white person.

The Lord works righteousness and justice for all the oppressed (Psalm 103:6) 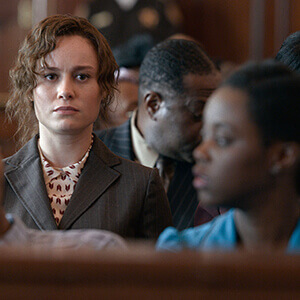 Just Mercy isn’t an apologetic against the death penalty, but it should make Christians think again about a “justice system” that is unjust for a significant part of our population. If even one person is killed by the state unjustly, is it worth rethinking capital punishment? A biblical view of justice is one in which we seek the wholeness of individuals, communities, and the cosmos, by upholding both goodness and impartiality. God’s justice, extended by the hands of his people, is restorative rather than retributive. In short, to “do justice” is to enact God’s kingdom, God’s new redeemed creation, God’s eternal reign here on earth “as it is in heaven.” When we prioritize justice, mercy and faithfulness, we bring the perfect state of God’s fully-realized future into the present. To paraphrase EA Sports: “If it’s in the Kingdom, it’s in the kingdom.” We symbolize and signify the fullness of God’s perfect justice today, no matter how difficult or complicated. Though it will be imperfect we must strive for it! It is part of the struggle of being in the “already but not yet” of God’s inaugurated kingdom that we will strive for the ideal, the holy, the true, and not always hit the mark. This is where communal prayer and worship and collective action intersect. There are many christian groups seeking justice in the world, and we do well to learn from them and join them. Freedom Road, EJI, Evangelicals for Social Action, The Poor People’s Campaign, The Immigration Coalition, International Justice Mission, and thousands of local ministries around the country.

All the technical elements that make a film great – costumes, cinematography, sound, script, even acting – are achievements worth celebrating. But something those elements can’t overcome, even when combined to the best of each, is the lack of a story worth telling. Just Mercy is a story worth telling. Not only is it worth telling, it must be told; it’s vital because it tells the truth. “Whatever is true, whatever is noble, whatever is right, whatever is pure, whatever is lovely, whatever is admirable—if anything is excellent or praiseworthy—think about such things.” That word “think” in Paul’s letter to the Philippian church is an economic metaphor. It literally means “calculate the value of.” Another way to write it would be to say: “Count the cost of the truth.” In the biopic Just Mercy, we see what truth costs – both at a personal level, a community level and, if we’re willing to bear the weight of it, a national level. Go watch this film with a group of christians from different backgrounds and have a discussion about what “justice” and “mercy” mean. Then go out and join with God’s work of justice and mercy in your context.

Manned missions to Mars are coming! Can you believe that? Humans are going to explore other planets! A mission to Mars is not just science fiction anymore as NASA will…