My Spider-Man was the 1981 “Spider-Friends” version, complete with invented sidekicks, incomprehensible Saturday morning subplots, shoddy animation, and a little dog too (spoiler: they were all killed off by a vampire in the 2014 Spider-Verse story arc because… comics). My brother had a Mego doll and Underoos when we were kids (I had the Hulk), and I remember driving 30 miles to the nearest comic book shop when I first got my license to buy the early issues of the Todd McFarlane 90s reboot. I never got into the Tobey Maguire or Andrew Garfield movies, though this new Tom Holland iteration is pretty great. All that to say this: I’ve got a long history with the character but I’m not a “fan” in the way people on the internet are spectacularly known for (exhibit A: writer Dan Slott received death threats from those generous fans on his latest run). 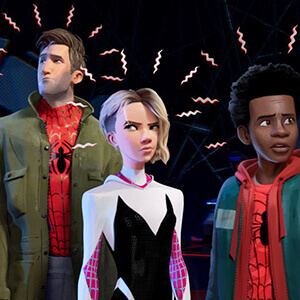 There’s a problem with all comics that isn’t super obvious at first because people used to read them for a little while as kids and then “grow out” of them: the characters never age. Peter Parker from the early 60s is essentially the same Peter Parker in the early 90s. Batman (the comic) is almost 80 years old, making Batman (the character) a centenarian. So comics came up with two pretty great solutions: Passing the mantle of a costume — which has had mixed results — and the multiverse. I love the multiverse idea for a lot of reasons but the biggest one is infinite story variations. What if Gwen Stacy got bit by the spider and she couldn’t save her friend Peter Parker? What if Spider-Man originated in India or Japan or the UK? What if Uncle Ben was Spider-Man? What if Spider-Man was a young afro-latino kid in an alternate Brooklyn? Or made of Lego? Or also a werewolf? You get the idea.

In Sony’s latest attempt to create a successful Spider-Man property, the animated film Spider-Man: Into the Spider-Verse introduces us to Miles Morales (voiced by Shameik Moore) — a 13-year old afro-latino kid living in an alternate Brooklyn (in universe #1610 to be exact). Miles is in the midst of transitioning to an elite boarding school when he’s bit by a radioactive spider. After witnessing a deadly crime and making a promise to a dying hero, he decides to take on the mantle of Spider-Man. Because the villain is experimenting with parallel universes, other spider-heroes are pulled in to Miles’ world.

Miles Away from the Silver Age 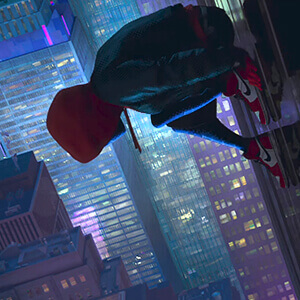 Controversial in 2011, Miles Morales was a lightning-rod character. Stan Lee loved him, but all was not well. The usual charges of “political correctness” were leveled at Marvel, and long-time fans bemoaned this new version as nothing more than a publicity stunt. In 2019 the introduction of a “black Spider-Man” to wider audiences seems obvious. One reviewer noted that white heroes of the 70s and 80s like Luke Skywalker and Peter Parker were an “ontological chasm too much to cross” for him; he always imagined himself as the young, black, sidekick. While not all people of color feel this way, it is 100% true that representation matters. Miles is urban, ethnically-mixed, casually bi-lingual, listens to hip hop, and is trying to figure out his place in the world. As America becomes less Anglo, kids like Miles are roughly half of the next generation. He’s not a trope or a token or a stereotype, he is our kids and their friends. Asking the question “How does a kid like Miles deal with the great responsibility that comes with great power?” is what fantasy storytelling is all about. For young kids of color to see that projected 30′ tall can only be a good thing.

The story is fine. If you’ve read comic books or watched any superhero cartoons you’ll recognize the “save-the-universe-team-up” idea. You get a bunch of gimmicky variants of a hero together and they learn to become a team. In this case Miles is joined by 40-something, world-weary, mid-life-crisis Spider-Man (a pitch-perfect Jake Johnson); a teenaged Gwen Stacy (Hailee Steinfeld); Spider-Ham, a 2D cartoon pig (John Mulaney); Peni Parker (Kimiko Glenn), a Japanese-American schoolgirl from the future piloting a spider mecha; Spider-Man Noir, a black and white, Nazi-punching, 1930s hero ably-voiced by Nicolas Cage. Johnson’s Spider-Man is set up as Miles’ mentor but has no idea what he’s doing. At the heart of the film is a story about relationships that dips into melodrama but is affecting nonetheless. Produced by Phil Lord and Christopher Miller (The Lego Movie, Cloudy with a Chance of Meatballs), Spider-Verse leans hard into Spider-Man’s comedic background — visual and written jokes abound.

Breaking Animation to Save Animation 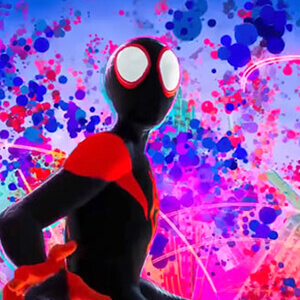 The standout star of Spider-Verse is the animation. A blend of CG and cell-drawn, heavy with “vintage” textures to mimic old comic books (misaligned CMYK color plates, moiré and half-tone patterns, hand-drawn lines, flat rendering) mixed with an “urban graffiti” aesthetic make this film a contender for Animated Feature Oscar. An early scene with Miles and his uncle Aaron (Mahershala Ali) creating a complex piece on an abandoned subway wall particularly stands out as a blend of organic and CG. The graphics used to represent the chaos of the third act, when parallel universes are colliding in a gigantic lab, are eye-popping and the exact kind of over-the-top, all-in animation that makes Spider-Verse boundary pushing. The camera, inspired in part by the work of Alfonso Cuarón, moves around the environments freely and fluidly, lending a realism that is a counterpoint to the impressionistic animation. The New Yorker recently said the style “laboriously weighs down the film’s substance in an artifice that sinks into contrivance.” Do they ever get sick of being wrong? Sure, the art direction is bonkers, but it works.

If you have to choose between superhero movies right now, bypass Aquaman and head over to see Spider-Verse. It’s innovative in all the right ways, laugh-out-loud funny, and inspiring for any audience (a little intense for the youngest of kids perhaps). With the introduction of Miles Morales to movie-goers, Marvel is setting the stage for its expanded multiverse of variant heroes. No matter which Spider-Man is yours — or if you’re not yet a fan — I highly recommend Spider-Verse. Go see it on the big screen before it’s gone.

I proposed to my wife in a coffee shop. I dressed in a suit and sang her a song in front of strangers. The ring was inside a coffee cup….