This summer has been holding out on us. Over the past month, we’ve seen the rise of a lasso-wielding warrior, the ongoing drama of transforming cars, and the return of a web-swinging hero. With all of these big blockbusters practically coming back to back, a film would need to be unique in order to survive. War for the Planet of the Apes may just fit that bill, but it has a lot more baggage to overcome. Namely ten other films and a TV series worth of baggage.

The intelligent apes have had a mixed bag ever since studios decided to continue past the original Planet of the Apes in 1968. In fact, the future did not seem all too bright until Rise of the Planet of the Apes came in 2011 and brought about the new age of Caesar and company.

War for the Heart

As mentioned, the main conflict is between Caesar and the Colonel. The film starts off with a cheesy prologue that then leads into a brutal battle sequence. The human soldiers are decked out in the best military gear with pun-filled jabs at their enemies painted on their helmets. Prior to the apes showing up, it feels like the opening of any other war movie. In this particular circumstance, the humans lose, but Caesar decides to show mercy to the survivors and tells them to deliver a message. “Leave us the woods,” he says, “and the killing can stop.” He does, after all, have no quarrel with man; rather, he and his tribe are suffering the consequences for the actions of Koba from Dawn. It’s a shame that the Colonel does not understand this. He views the apes as a threat to the evolutionary process and would like nothing more than to wipe out every last sentient ape from the earth. 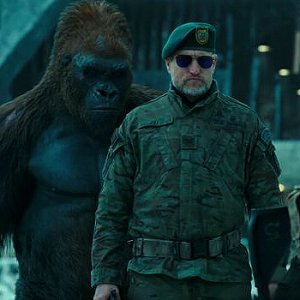 Thankfully, Caesar’s son Blue Eyes may have a solution to the conflict: He and a friend have discovered a paradise beyond a desert that man would not dare cross. All they have to do is find a way out of the woods without the Colonel’s Alpha-Omega squad seeing them and then they will be all set.

That is all well and good, but the Colonel strikes first, dealing a massive blow to Caesar. As a result, Caesar goes on a personal vendetta to hunt down the Colonel. His mercy leaves him. A dark creature enters his heart.

The Apes movies have always had a knack for highlighting the savagery and darkness possible within humankind. This time around, Caesar’s quest leads him down a path that parallels the mercilessness of his prey. If it wasn’t for his allies, he would have descended fully and become no better than those that he is fighting.

And boy does he have some great allies. Maurice (Karin Konoval) acts as a reminder to Caesar of why they are fighting and what their true goal is: peace. Newcomers Bad Ape (Steve Zahn) and Nova (Amiah Miller) bring a lot of light back into Caesar’s world. The former is probably the quirkiest ape in the film, offering a lot of humor to otherwise bleak moments and showing a child-like innocence that Caesar has lost. Nova, a human girl, reveals to him the softer and warmer side of humanity. She also acts as a symbol of hope and love, as well as what man could be like if this series were to continue.

Over in military land, the Colonel serves as judge, jury, and executioner. He is also a twisted religious man, seeing himself as the savior of mankind and cleansing the world of any who are “impure” or stand in his way. At one point he states, “There are times when it is necessary to abandon our humanity to save humanity,” which raises one of the film’s biggest points. Is there really any humanity left? And if so, is it worth saving? Caesar even goes through this with his own humanity (ape-ity? Simianity?), often leaving it behind to save those around him and satisfy his thirst for revenge. When given a way out he states, “I cannot forgive,” mirroring the flaw in Dawn‘s Koba. Yet maybe the actions of the other apes can help him remember who he is and that having a heart is not the worst thing in the world.

Despite the coldness that grips him, Caesar and many of his other companions make sacrifices throughout the film. One scene in particular involves an ape putting himself in danger to save someone who is not his kind, exemplifying John 15:13, “Greater love has no one than this: to lay down one’s life for one’s friends.” It is moments like these that bring out the tensest and most heart-wrenching and satisfying scenes of the film. Granted, some of these moments lead to some predictable choices from some of the characters, but as the story goes on it is easy to forgive. 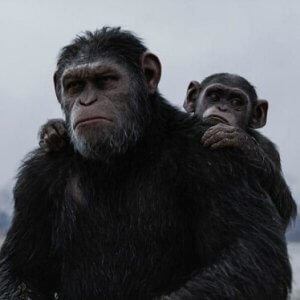 As Caesar and his companions remind each other so often, a group bound together is stronger than anyone could ever be apart, just like a cord of three strands is not easily broken (Ecclesiastes 4:12). If only man could figure this out. Though the Colonel has amassed a large force, we hear rumblings of other groups out there that do not support the Colonel’s views and must therefore be eliminated. He is selfish to the umpteenth degree, asking his men to sacrifice others before themselves. Though there are hints of religion and crusade here, the Colonel and his forces show us what a life without hope in Jesus can lead to.

When the climax hits, these two ideals clash in the most explosive of ways. The resolution may leave an impact, but it may also be a distracting part of the movie. War has a western tone to some of its narrative. As a result, there are quite a few slow dissolve transitions in the film. Some of them work, but then others are minor distractions from the impactful scenes happening onscreen. This is a small thing, though, in light of a movie so strong.

Underestimating the Planet of the Apes

War for the Planet of the Apes is a satisfying conclusion to this new trilogy. The themes are deep and thought-provoking. The action is brutal but serves a purpose. The visuals are stunning and the apes have never looked more realistic. The performances are well done across the board, and the film is accompanied by a beautiful score from Michael Giacchino. Aside from an almost groan-inducing prologue, a few predictable character choices, and some distracting editing, War soars high over the majority of its Apes predecessors, if not all of them.

In my viewing of the film, there was a family behind me laughing at the ridiculousness of apes riding horses and having loving, human-like moments. But they became silent as the movie went on, a true testament to how War for the Planet of the Apes brings you into its world and makes you feel for its characters even if most of them are computer generated. Some people may not give this movie a chance because it is about apes acting like humans and therefore must be a stupid and ludicrous film. But if these people are willing to give it a shot, they may discover a story about triumph, failure, consequences, sacrifice, hope, and the human condition — a much deeper story than you would expect in a summer blockbuster film, let alone one about apes.

Andrew Furstenberg is a lover of film, books, and any other form of storytelling that he can get his hands on. He is a novelist and screenwriter, striving to use the gifts that God gave him to create inspiring and impactful content.

Blade Runner is a classic. That’s undisputed. The 1982 film, directed by Ridley Scott, is a breathtaking blend of noir and science-fiction that offers us a glimpse of the future…