“We would rather be ruined than changed,” wrote W.H. Auden. “We would rather die in our dread than climb the cross of the present and let our illusions die.”* As an addict, especially a recovering addict, yes, Auden, I would prefer attempting to build with ruins than build upon the rock. The rock is hard. So, while The Country Girl may be about many things, including “marital discord,” “the attraction of philandering,”** and, of course, a country girl, for me, it is 104 riveting minutes in the theatre of addiction, featuring a trio of hypokrites with habits — actors by profession and/or necessity — and the lies they tell themselves and each other.

Their Own Version of Events

Frank Elgin (Bing Crosby) is a “wonderful guy,” according to almost everyone, the sort who remembers your kids’ names and has a joke for all occasions. He is also, according to his wife, Georgie Elgin (Grace Kelly), “weak,” “a leaner” and “a cunning drunkard.” This behavior started 10 years before the movie does, after the accidental death of the Elgin’s only child. At the time, Frank was an unequaled entertainer, easily conquering radio and Broadway; it was the latter on which Bernie Dodd (William Holden) first witnessed Frank’s magnificent talent, and now, a decade later and directing a show, wants him for the lead, despite the rumors of drinking. But then, none of these characters listen to rumors, or advice — just their own version of events, coming over and over their mind’s wire.

“[Frank] hates himself,” Georgie laments to Bernie late in the film. “Consequently he’ll do or say anything to be liked by others. People like Frank ought to have two votes. Then they could mark their ballot Democrat and Republican. That way everybody would love them.” For those who hustle for people’s approval, this line isn’t accurate so much as it is an Eye of Providence, staring at us, from the top of a perfectly made point. But Frank is not the only one with an addiction. Georgie tries to fix everything even as she feeds on being needed, and Bernie tries to avoid failure even as he seeks out risk; they try themselves in knots and spellbind us.

The Distance Between Three Points 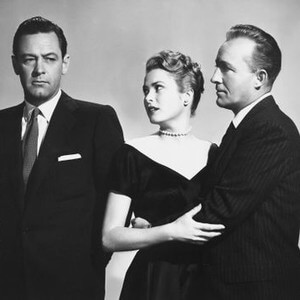 When Country Girl premiered on Broadway, most critics agreed on the quality of its structure, to which playwright Clifford Odets credited his recent work in movies: “[they] are a brilliant training school for a dramatic writer.” And yet, Odets did not take The Country Girl to Hollywood; instead, George Seaton took up the cause, and what a cause célèbre that is. Seaton’s adaptation is concurrently more cinematic and still theatrical — cutting characters but keeping the crackling dialogue, raising stakes but maintaining the shape — shortening the distances between three points, forcing the triangle to become smaller and sharper by the second.

Odets never really wanted to be seen with The Country Girl, calling it “a superficial play.” Perhaps this is due to the alleged lack of his customary “humane social gospel,” as critic Robert J. Griffin dubbed it. Odets had the morality of an outsider and the perceptiveness of an insider, which put him in a unique position to critique, to present another vision for society. But if we are to believe Richard Rohr that “addiction is a modern name and honest description for the biblical tradition called ‘sin,’” then it is difficult to accept The Country Girl is without social gospel of a kind, involving, as it eventually does, the admission of a problem and the making of amends. When that happens, a higher power will overshadow you, whether you invoke it or not.***

Seaton’s most brilliant choice, encouraged by the made-to-order nature of filmmaking and stars, is remodeling the character of Frank Elgin for Bing Crosby. In the play, Frank is a former legend appearing in a rather nondescript drama, giving the sense that most decent actors of a type could play this man. In the film adaptation, Frank is a fallen star with a talent and career so similar to Bing Crosby that the believability is unshakeable. There is no “character,” there is no “actor,” there is only Frank Elgin, in front of us, falling apart. And Crosby puts together a performance the likes of which you won’t find in the rest of his filmography.

Groucho Marx called Grace Kelly’s Country Girl Oscar win “the biggest robbery since Brinks” — everyone expected it to be Judy Garland for A Star is Born — yet Kelly is the embodiment of the role, completely exhausted by codependency and unprepared for independence, but believing that all her “prayers have gone to see that one holy hour when he can stand alone…I want him just once more as the man he once was. Able to stand on his own two feet and face responsibility. And you don’t do that by bending the truth.”

A bender of truth is exactly what they all need, and indeed, the satisfaction of Country Girl is watching three people finally pause from running in circles and consider taking the first step. “Just about anybody can face a crisis,” Frank says. “It’s that every day living that’s rough. I’m not sure I can lick it, but I think I got a chance.”

“If you didn’t sweat so much nobody’d take you for a landlord,” Fanny (Diana Sands) tells Elgar (Beau Bridges). “You could pass for a human being.” Actually, The Landlord does…