I first went to see Selma on the weekend prior to Martin Luther King, Jr. Day this past year. The theater was packed – sold out in fact – and several of the friends I was going with were unable to get seats. We packed in together, elbow to elbow with strangers, the theater a smattering of skin tones and backgrounds giving the appearance of Dr. King’s famous dream realized.

We waited for the for opening credits to roll, each passing second filled with tension. The Ferguson protests had simmered down scarcely four months prior, and in our own community we were fast approaching the one year anniversary of the death of Dontre Hamilton – another unarmed black man whose life was cut short at the hands of law enforcement. The lights went dim and my eyes instinctively locked with the glowing screen. A black man walked in, and sat on the stairs. There were no seats left for him in the theater.

When the Samaritan Looks Away

From the get go Selma is a gripping film. I’ve read plenty of books on the civil rights movement, I wrote papers on it in high school, but seeing events played out on the screen hit me on a whole other level. I’ve often admired the civil rights leaders, placing them on pedestals and poring over their lives as though to gain wisdom and reconciliatory properties by osmosis. I’d never stopped to consider the abject horror of their lives. The day to day wondering, genuine wondering, “Will I die today?” 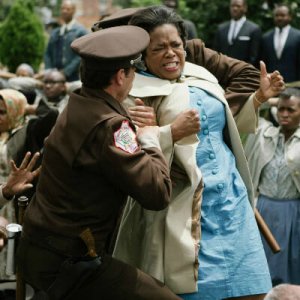 Within the first fifteen minutes of the film, I was jarred by images and events I could not even begin to expect. Selma invokes images of physical lives cut short to call attention to the emotional and psychological lives also being violently disrupted by Jim Crow and institutionalized racism in the 1960’s. For some reason, empathy is easier to come by when witnessing the physical assault of life than when the quality of someone’s life is threatened.

This summer, after the massacre in Charleston, South Carolina (which could have been a scene in Selma) a blog post entitled “I, Racist” swept through social media like wildfire. In the post, John Metta calls to mind the story of the Good Samaritan – a passage learned and studied in most churches from kindergarten Sunday School onward.

Metta writes: “This is why I don’t like the story of the good Samaritan. Everyone likes to think of themselves as the person who sees someone beaten and bloodied and helps him out. That’s too easy. If I could re-write that story, I’d rewrite it from the perspective of Black America. What if the person wasn’t beaten and bloody? What if it wasn’t so obvious? What if they were just systematically challenged in a thousand small ways that actually made it easier for you to succeed in life? Would you be so quick to help them? Or would you, like most White people, stay silent and let it happen?”

As I watched Selma again this summer I thought of Metta’s words. Some scenes in the movie were nearly impossible for me to watch, the gruesome display of racially motivated force too painful to look at, perhaps though only because lives were on the line. Perhaps I was so moved because there were bloody noses and concussions, broken bones and swollen eyes. I have no inclination to look away from the systemic injustices which keep poor black children in failing schools; which keep black men locked up longer and at much higher rates than their white counterparts.

Over and over again this past year, I’ve become aware of how often I look away. I turn off the news. I block out the stories. All because “I just can’t deal with it any more.” My black brothers and sisters, though, don’t have the option to look away or turn it off. They stare down systemic racial injustice and it’s life-threatening implications every day. One way this changes is for those of us in the majority to stay conscious to the hardships of those around us. 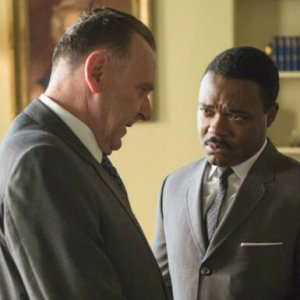 King employs this strategy in Selma, sighting his intention to “raise the white consciousness” by making sure their marches and sit-ins make newspaper headlines and are featured on the evening news.

It’s a Scriptural mandate as well. Aside from the parable of the Good Samaritan mentioned above, Paul admonishes the church in the book of Philippians: “Don’t do anything for selfish purposes, but with humility think of others as better than yourselves. Instead of each person watching out for their own good, watch out for what is better for others” (Phil. 2:3-4).

As a follower of Jesus and a white American, listening to the stories of my black brothers and sisters as they would tell them (which may or may not be the same way my history book would tell them) is a great first step in watching out for what is better for others.

The screen went dark. Common began to sing out:

“Hands to the Heavens, no man, no weapon
Formed against, yes glory is destined
Every day women and men become legends
Sins that go against our skin become blessings…”

The audience began to clap. A few rose to their feet. I’d never been to a movie screening ending in a standing ovation.

“Justice is juxtapositionin’ us
Justice for all just ain’t specific enough
One son died, his spirit is revisitin’ us
Truant livin’ livin’ in us, resistance is us
That’s why Rosa sat on the bus
That’s why we walk through Ferguson with our hands up”

Arms at sides, we began to shuffle out. A smattering of people looking like Dr. King’s dream realized, but more similar to Langston Hughes’ dream deferred. Raisins shriveled and ticking time bombs.

“Selma is now for every man, woman and child
Even Jesus got his crown in front of a crowd
They marched with the torch, we gon’ run with it now…
One day when the glory comes it will be ours.”

A choir swelled through the loudspeakers.

And we all just keep waiting for that glorious day, but in the meantime let us follow the admonition of Scripture and the example of Dr. King, and look not only to our own interests or what brings us benefit, what makes us feel good. Let us look first to the interest and benefit of others.

In the past three years, the Lego-verse has given us construction workers who are the key to everything and a caped crusader with family issues. This time around, The Lego…