It’s often stunning to think it’s been less than 60 years since man went into space — sorry conspiracy theorists. What’s less stunning is how space has since captured the imaginations of men and women across the world. Nowhere is that fascination more prevalent than on the silver screen.

Hollywood’s love of space itself isn’t a new phenomenon. Long before ​Interstellar was selling out theaters, ​2001: A Space Odyssey was changing the way theater-goers thought about the vast universe all around our home planet. And before the ​Men in Black were riffing on the possibility of endless extraterrestrial counterparts, Ridley Scott and James Cameron were scaring the pants off of cinephiles with the ​Alien movies.

All that being said, there does seem to have been a renewed fixation on the final frontier as of late. ​Star Wars and ​Star Trek are seeing renewed interest from wider audiences, and Marvel is cashing in with the likes of ​Guardians of the Galaxy. Even the auteurs of our time are reaching out — Alfonso Cuaron’s ​Gravity was widely praised for its visual ingenuity.

So far, this may feel like a simple rundown of movies about space. I do it for a purpose. I want you to bring to mind all the classics and cult classics dealing with the stars above and beyond before considering the newest space-flick, Daniel Espinosa’s ​Life. Many of the traditional space epics still shine like stars through time. ​Life, on the other hand, is a black hole, a big, expensive vehicle that can’t help but suck the life out of everything in its wake.

One of the best parts about seeing space movies has to be the visual grandeur. In the emptiness of the universe, filmmakers have always proven particularly adept at filling the emptiness with imaginative set pieces. Cinematographers have also used the wide open spaces to show how small humans are in the face of the universe.

Life — while admittedly focused on the happenings inside the International Space Station — loses all sense of this imagination by never exploring the relationship between the astronauts and their environment. Other than the constant floating effect, treated more as a necessity than a visual vehicle, you would be hard-pressed to remember these people are actually in space. Aside from a few glancing shots here and there, the audience is otherwise confined to medium-sized rooms and window views of the vacuum outside. 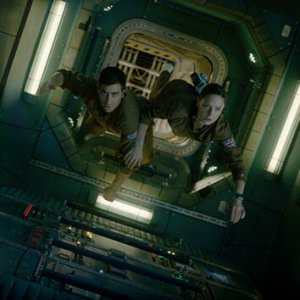 Not that films haven’t achieved success with similar tactics. The previously mentioned ​Alien is a masterclass is claustrophobia and anxiety, using the silence of space to highlight just how alone Ellen Ripley and her companions are in the face of the Xenomorph. ​Life, on the other hand, traps our “heroes” inside the ISS with Calvin — the film’s ET antagonist — and proceeds to show us all the ways they could possibly get away from it. By the end of the film, the various schemes they go through to combat the creature began to feel less like scientific innovation and more like comical failure. How could so many brilliant minds possibly be losing out to a creature that’s, “just trying to survive”?

Also on that note: ​Life is obsessed with letting you, the viewer, know that Calvin isn’t evil or hostile — though the latter word is used toward the end of the film — he’s just trying to survive. Life will find a way and all that. But the script can’t follow its own mythology. While Calvin’s survival tactics start out as understandable reactions, by the end they turn into violent, gruesome acts of maliciousness. I won’t spoil the ending, though it’s easy to see coming about 10 minutes out. But Calvin surely isn’t just trying to survive by the end.

My main problem with ​Life isn’t the inconsistent suspensions of belief or the lack of imaginative construction. It’s the people populating the story that make it so uninteresting.

To be fair, a loaded cast — Ryan Reynolds, Rebecca Hall, Jake Gyllenhaal, Hiroyuki Sanada, etc. — isn’t given much interesting material to work with or even dress up. But it’s surprising how one-note their performances are. Reynolds plays a dressed down version of his trademark Deadpool, Rebecca Hall is stripped of any power or agency and Gyllenhaal feels unbelievable trying to fabricate a character who isn’t entirely there. The only character of note is Sanada’s Sho, a father having to watch his child’s birth from afar. He’s the only person given real stakes or who I entirely cared about getting home at all. His arc, however, is pushed aside for the less interesting forced romantic overtures from Hall and Gyllenhaal or Reynolds’ verbal grandstanding. 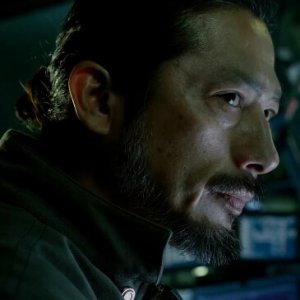 The entire conceit of the movie is built on the fact these characters need to get home…or is it save the world? ​Life doesn’t always know. But at no point is it actually believable that these people are capable enough to do either, or likable enough to root for. And it’s not so much because of anything they did, though Hall’s character hides an important secret the other crew members deserved to know. It’s because of their total lack of action overall. There are no defining characteristics to latch onto or relatable traits we as viewers can celebrate. This one’s overly driven, this one’s got a smart mouth, this one’s kind of weird and shy… and on and on it goes, a medley of generic character traits that add up to a team not worth investing in.

At the heart of the film is a message; yes, it does have something coherent to say, I’ll give it that. And it’s a fairly noble one: discouraging scientific overreach for the sake of pride or sheer curiosity.

But I can’t help feel like ​Life takes this message and muddies it with an overdose of nihilism. Don’t get me wrong, movies in this vein can be invigorating. The ​Kohelet is one of my favorite Biblical authors with his “chasing after the wind” theme. There’s a time and a place for it. But going back to what I talked about earlier: space films ooze imagination, creativity…life. They take the emptiness of space and fill it with colorful emotions and emotive people. While it’s not specifically out of scripture, the mandate of ruling over creation feels somewhat appropriate. If anything the task of going beyond our world and into the heavens has an overtly spiritual feel. ​Life doesn’t condemn that reach specifically…but it’s easy to connect the dots after a while.

I saw a tagline for this film once that said something along the lines of, “It’s not death we should fear, it’s life.” It’s pretty obvious that’s a central theme. And yet, ​Life’s end result couldn’t have been more different. It’s mired in unimaginative death, grounded before it can even begin to take flight and join the classics that came before it.

In June I went to the library to pick up Mart Crowley’s The Boys in the Band, and while walking to the video section, I passed a display table of…