In the opening scene of Trey Edward Shults’ 2019 film Waves, a fluid 720 degree angle shot introduces us to star athlete Tyler Williams and his girlfriend Alexis as they coast down a South Florida highway in carefree abandon. The shots that follow bring us into the merciless world of demand, law, and performance in which Tyler struggles to maintain momentum. Coaches inform the wrestler and his teammates, “There are no second chances…there is no second place…have a plan when stepping onto the mat…have a plan when you step out into life.” An English teacher reminds the class right before dismissal, “Always, Carpe Diem.” The team is coached to chant in unison, “I cannot be taken down…I am a new machine.”

Amplified by the pressures inflicted on him by his well meaning, yet demanding, father (the inimitable Sterling K. Brown), Tyler’s life accelerates toward destruction. As his storyline develops, we see him pursuing a kind of love contrary to that which St. Paul describes in 1 Corinthians 13 in which the apostle (and Tyler’s pastor) explicates, “Love does not seek its own.” Rather, the “love” Tyler pledges to Alexis is driven by a neurotic compulsion that culminates in her unfortunate, albeit unintentional, murder at the conclusion of the film’s first act.

It is at this pivotal moment, however, that the film intimates “a more excellent way” (1 Corinthians 12:31). Tyler sits in the back of a police car having been apprehended for his reckless crime of passion. We see a fade to black, yet continue to hear Trent Reznor’s haunting score as an amorphous red hue gradually subsumes the darkness and we hear what resembles either a heartbeat or breathing or some combination of both invoking motifs of birth, or rather rebirth. We eventually see Tyler’s sister Emily sitting in the back seat, but not in a police car. She’s a passenger in the back seat of the family car as she and her parents approach the courthouse where Tyler’s trial is underway. This time they are not on their way to church or to a family dinner as has been presented in earlier scenes. They are on their way to hear a verdict…not just on Tyler, but on their family’s cohesion.

The Power of Love

After Tyler is sentenced to 35 years in a Florida State prison, the film’s focus shifts and as we see Emily’s story unfold. Shults presents us with a complete antithesis to Tyler’s narrative. The camera captures her in pensive moments as she attempts to assess the implications of her brother’s heinous act and ensuing incarceration. Her grief is tinged with conflicting emotions, as at one point she denounces him as being utterly monstrous to which her father graciously counters in a moment rife with intercessory overtones of “Daddy’s favorite verse…’Love covers a multitude of sins.'” 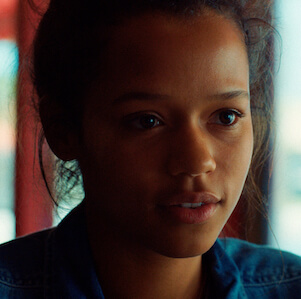 While references to faith, religion, and church are sparingly infused throughout Waves, providing a subtle context dissimilar to the often heavy-handed approach of typical “faith films,” what’s most striking is the way Emily’s juxtaposition against her brother underscores the supremacy of sacrificial love and grace.

After watching the film twice, I found myself driven to read and reread 1 Corinthians 13 during my evening devotion time. What stood out as I refamiliarized myself with this classic text was Paul’s declaration: “Love never ends…faith, hope, and love remain, but the greatest of these is love.” More importantly, though, grace supersedes lust and entails the true freedom the latter can only imitate.

During her season of grief, Emily chances upon an encounter with Luke (Lucas Hedges) who we incidentally see earlier sparring against Tyler during wrestling practice. After a scene aptly conveying an awkward first date, an organic and genuine relationship blossoms in a context of grace and vulnerability. Virtually every aspect of Tyler’s story is recapitulated, but with redemptive implications. We see for example Emily hanging out the window of the passenger side as Luke drives them home from a date. The soundtrack accentuates the euphoric state in which she remains enraptured having been found by a love free of compulsion and manipulation. An identical scene in the first act conveys Tyler hanging out the window deluded by the narcotics he has consumed to numb the pain of his recent breakup with Alexis. What’s significant about this contrast is that Alexis has ended the relationship due to Tyler pressuring her to abort their unborn child. Conversely, Emily has just been told by Luke that there’s no pressure to do ecstasy at a party they had previously attended. 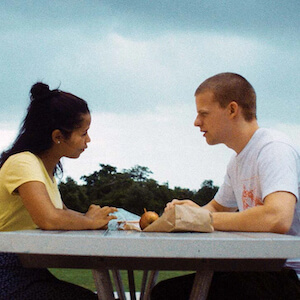 A genuineness pervades Luke and Emily’s relationship in that they actually take time to get to know each other…beyond the quirky moment early on when they initially insta-stalk each other’s social media profiles. Contrary to the superficiality that marked Tyler’s relationship with Alexis, Luke and Emily take time to learn about one another’s likes and dislikes; they discuss the distinct features of sea manatees and spontaneously decide to visit an aquarium as Chance the Rapper’s How Great undergirds a casual, albeit brief, conversation about their religious upbringing. More intimately, they discuss their family upbringing…specifically Luke’s estranged father who we learn is dying from cancer. Emily suggests they embark upon an impromptu road trip so Luke can make peace with his dad despite their strained relationship. Here, the film presents yet another parallel between its central protagonists. While Emily absconds in order to selflessly help restore a broken relationship, Tyler has earlier vanished from home on a mission to stalk Alexis and salvage the remnants of their failed romance. His quest ends in devastation, yet the ensuing despair facilitates the film’s most acute portrayal of reconciliation and renewal as Emily comes to embody the presence of grace holding the family together in an unassuming manner. Early on, we have seen her comforting Tyler after a night of attempting to anesthetize his pain with pornography, drugs, and an overflowing bathtub mirroring the excess of his out of control life. While consoling Luke in the hospice where he makes amends with his dad, she sends a text to her parents initiating the reconciliation their fractured family needs in light of Tyler’s downfall. What follows are scenes sparse with dialog, yet rich with implications of relational tension subsiding, reflection and remorse over sins committed, and somber reckoning with the reality of loss. While not necessarily plot-driven, Waves employs a unique aesthetic that interweaves themes of love and loss, while demonstrating how the latter can give way to the flourishing of the former. The film ultimately asserts that we do not find love per se, but rather we are found by love…often in our most broken state. Sound familiar?

The final shot shows Emily effortlessly pedaling her bicycle through her quaint suburban neighborhood. With quiet reservation, she extends her arms as she glides down the street. We’re reminded of the contrasting opening shot where Tyler gives the appearance of being free as he drives with his hands removed from the steering wheel. What looks like freedom is eventually revealed to be a life spiraling out of control…what looked like love was exposed as a desperate lust for control. Because of grace, what looks like a family shattered by tragedy turns out to be a picture of life from the dead. Sound familiar?

Jason Thompson has been a Christian since the Fall of 1999, but really had his eyes opened widely to the amazing depths of God's grace while studying the book of Romans in Fall of 2010. He hasn't been the same since. He walks through life with his beautiful wife Angela with whom God gifted him in June of 2008. Together, they share their lives with Joshua, Sarah, and Grace. Jason can't help but see echoes and traces of a Law/Gospel dynamic in various facets of the arts and daily life. He can infer a gospel-centered implication from almost every film, song, or daily occurrence. His favorite film will always be E.T. - mostly for sentimental and nostalgic reasons!

One of the dangers of writing about film is the ever-present danger of groupthink. We cinephiles love to consume movie culture which includes films themselves as well as criticism. In…