When’s the last time your body demanded movement? If you’ve watched Ari Aster’s Hereditary at any point in the recent past, perhaps you’ll have an answer.

There’s a moment in the modern horror classic that demands movement from the viewer, be it internal or external. Alex Wolff’s Peter Graham is racing down a dark country avenue, his younger sister Charlie seizing in the backseat, gasping for air. She’s just ingested walnuts, to which she is allergic, after having been left unattended by Peter at a party. He was smoking weed, trying to impress a girl. She was eating a piece of cake, unaware of the dangers within.

As Peter recklessly speeds down the road, Charlie shoves her torso out of the window, desperate for oxygen to rush into her tightening throat. A deer carcass materializes in Peter’s view, and he swerves to avoid it. Charlie’s head, dangling from the window, collides with a nearby telephone pole with a sickening crack. The car grinds to a halt on the loose dirt.

For the next sixty seconds – it’s exactly sixty – Peter sits in silence and stillness. His eyes drift to the rearview mirror, but quickly dart away. After the time passes, he tightens his grip on the steering wheel and starts the car. 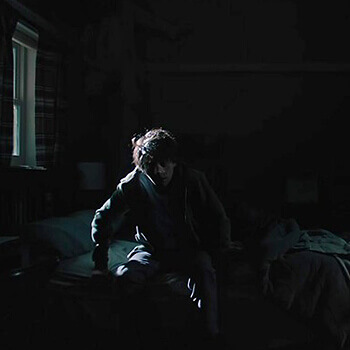 It’s nearly impossible to not be moved by those 60 seconds, even if we can’t come to an agreement on what type of movement you may be experiencing. Maybe your insides are gurgling, your body physically reacting to the unseen reality on screen (though the unseen comes to the light in the ensuing minutes.) Perhaps, like me, your body can’t help but contort and twist, an inexplicable reaction to the utter lack of movement from Peter in this traumatic moment. The scene exists like a vacuum or a black hole, suctioning movement, emotion and shock from all existing space.

It’s not a general value judgement, but this sort of mise en scene is essential to great horror cinema, even when it doesn’t involve silence and stillness. It’s the bubbling in your guts when Reagan violently assaults herself with a crucifix in The Exorcist. It’s the tightening of your muscles when Jack Torrance swings his axe into Dick Hollorann’s chest near the end of The Shining. Great horror demands that you physically move, even as your brain begins to process the fight-or-flight hijacking that your amygdala is enacting.

It’s a wonder then, that Christian culture warriors have long discouraged engaging with horror films. After all, the movements involved in watching a scary movie are strikingly similar to when you sing at church on Sundays.

Consider how movement and stillness factor into some of the most exuberant and intimate moments of worship in the Scriptures. David, upon the return of the ark from Baale-judah, dances wildly in his linen ephod, exposing himself, “like a vulgar person.” A still small voice compels Elijah to physical movement above a mighty rushing wind, earthquake and fire. In the Garden, Christ prays in the silence and stillness of the night, blood oozing from his pores.

Movement and stillness have a propulsive relationship in these passages, as in everyday life. But it would be a mistake to think that relationship only goes one way. While we tend to think of stillness as the logical starting point, a pre-state of movement, could Scripture be pointing us the other way?

At the very least, it’s a mystery. We know that in the beginning, God created – that the Spirit hovered over the waters. Is creation an act of movement? Is hovering? It’s impossible to say, as we also know that God created from the void. If we are created imago Dei, yet in physical matter, do we come from stillness to movement? Or do we echo the eternal God, existing from movement to a sort of Divine stillness – death to this world and resurrection to His?

Giving us a fascinating glimpse at this divine mystery, liturgical worship and horror cinema act as two sides of the same coin. The former evokes movement and sound from the deep truths that resonate within our innermost being. The physiological effect of a good melody or emotionally-timed drum riff is undeniable – but is it these or something deeper that move us to raise our hands and lift our voices? Speaking personally, a soul-level understanding of divine love and overwhelming grace has drawn tears from my eyes countless times more than the chord progressions in any CCM chart-topper. Stillness – or maybe, more appropriately, immovable truth – coaxes the body to movement, a rapturous eruption that defies inertia.

Horror invites us to explore the brokenness of the world

Flip the coin over, and we see how horror leads us back to stillness – or perhaps how horror moves inward to still reflection. The confrontation of unbridled tragedy or the slowly approaching axe murderer kicks our brain into gear. This shot of adrenaline greases our wheels, putting our brain into overdrive while we flinch and recoil in horror. We’re able to more fully process the events on our screen as a result.

At this point, you’ll usually hear someone recite Phillipians 4:8, arguing that fear and the things that drive us to it cannot be commendable or have any sort of excellence. To think this way, however, is to deny art of its most basic functions. Even the writers of Scripture understood the usefulness of dramatic language and visual imagery – books from Ecclesiastes to Revelation have driven believers to existential terror since their inception.

And while worship bids us to reminisce on wholesome truth, horror invites us to explore the brokenness of the world. Sometimes it’s hyperbolic: is Halloween a celebration of murderous rampaging or an acknowledgment that inexplicable evil exists, even in American suburbs that we’re conditioned to think of as safe? Sometimes it’s more grounded in reality: there’s a reason Jordan Peele refers to his breakout hit Get Out as a documentary rather than a work of dramatic fiction.

Confronting the realities of sin and brokenness shouldn’t be viewed as dwelling on evil, but rather as opportunities to acknowledge a world steeped in misery. If creation is currently in bondage to decay, why should we avert our eyes and demand that our art be sanitized? Horror offers us a moment to pause, consider, mourn and, then, move accordingly.

It was Christmas Day 2014 and my daughter, Cadence, and I were settling into our seats in the theater. Just shy of three years old, her feet dangled above from…