As an average American high school student, in addition to being tested on what I could remember, I was tested on what I would become. There were personality tests, aptitude tests, career tests; all sorts of fraudulent fortune telling, wherein I provided information and the test provided speculation. The results were consistent: I should be a pastor. Or an actor. That the test declared those vocations as separate is adorable, like a little dog you keep stepping on.

The experiences I have of confidently shepherding, or unquestioningly following, are often during acts of trustful imagination — a time of public speaking where I feel my words slipping into a current, pulling me forward; a period of writing so concentrated that time melts, like a Dali painting; a scene in which I am both acting and being, alert and hypnotized. They are moments free of what Anthony De Mello calls the “tragedy of attachment.”

Three paragraphs into the review and I haven’t talked about the film, but I want to convey how the gift of performance ushers me into the presence of the Great. And how easy it can be to use the gift for my own gain and forget where it came from. The Miracle Woman can testify to that.

Hot Steel in Her Blood

Florence Fallon (Barbara Stanwyck) is the daughter of a preacher with “hot steel in [her] blood.” The film opens after the death of her father and just before he was about to give his farewell sermon, so Florence gives it for him, and gives it to the congregation, in surges of aggrieved rage: an indictment for putting her father out to pasture and being wolves in sheep’s clothing. 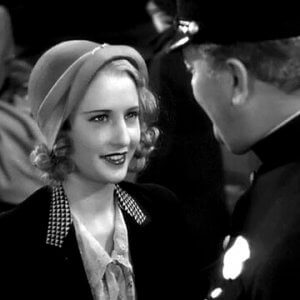 In attendance that Sunday is a racketeer named Bob Hornsby (Sam Hardy) who sees an opportunity at this intersection of Florence’s talent and indignation. “You’re sore at all those people out there because they fired your old man and it killed him. You want to get back at them, don’t you?…Your old man was a preacher…it was born in you. You’ve got to do something with it, don’t you? Now religion is like everything else: great if you can sell it, no good if you give it away.” So, to avenge her father, or satisfy her ambition, or hone her craft, Florence becomes the figurehead of Hornsby’s religious empire. His knack for the grift is equal to her gift for preaching, and soon they have people flocking to the church, with politicians and shills on the payroll.

The shills are actors hired to feign miraculous healing, or otherwise sell Florence’s spiritual powers to the public, and from the beginning she wants to get rid of them. “They’re fakes,” she bemoans, “and I know they’re fakes.” One night, as the appointed shill is nodding off in the front row, aided by a few too many drinks, Florence instead calls upon a genuine volunteer, David Manners (John Carson), a WWI pilot who was blinded in active duty. David’s good faith, or good humor, appeals to Florence, and quickly she is dividing her time between the church and his apartment. But Hornsby has a doctrine of discovery about Florence and will not accept her prior claim to life, one that she may have to lose to find again.

“My next project would deal with the most controversial idea I could think of — religion!”* Writes director Frank Capra, of Bless You, Sister, the play which he had picked to adapt for film as Miracle Woman. Upon hearing this, playwright Robert Riskin responded, “my brother and I were stupid enough to produce it on Broadway. It cost us almost every cent we had. If you intend to make a picture of it, it proves only one thing: You’re even more stupid than we were.”

According to that definition, Capra was stupid, because Miracle Woman was a box office failure. But I’m willing to wager that was an objection to its perceived or actual portrayal of revival meetings, not a rejection of its artistic and/or entertainment value. Bless You, Sister is no longer in print, but by all accounts it was a bird of prey, sinking its talons into religion. “I turned chicken,” Capra writes. “The thought of a wicked evangelist deliberately milking the poor, adoring suckers for money in the name of Christ was just too much for my orthodox stomach. I weasled. I insisted on a ‘heavy’ [Sam Hardy] to take the heat off Stanwyck the evangelist. He cons her into it.” Here Capra is dishonest with himself and his characters. Maybe the addition of a “heavy” means a shared culpability, but Florence is still independent and responsible for her decisions, as is Capra. 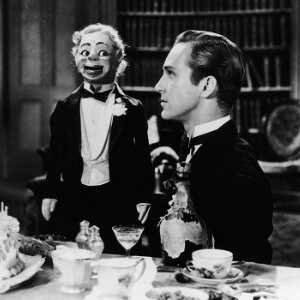 “The paradox of Capra’s work,” writes Ramond Carney,** “and the predicament with which his central characters must cope, is that although they aspire to be…individualistic…they are seldom able to remove themselves from…social contexts.” Throughout the film, Florence struggles to be authentic and approved, vulnerable but in control, and she’s not the only one. During their first unofficial date at his apartment — a scene contingent on John Carson’s skill and charisma — David is so concerned with entertaining Florence that he brings out a dummy and does a ventriloquist act. That’s a risky choice, even in the age of vaudeville, and it’s animated by an anxiousness to be liked. And when David finally attempts to convey his love to Florence, the dummy comes out again. It’s a spacious metaphor, accommodating the characters, the director and the star.

Florence is so interesting is because those depicting her were interested. “[Barbara Stanwyck is] a natural actor whose body is a medium to distill a character’s motives and emotions,” wrote Richard Corliss. “Maybe she was nowhere so comfortable, so at ease with herself, as on a movie set, playing a character.” It seems Florence and Barbara could be sisters. And Frank could be their brother: “There was a deeper reason for Capra’s response to the play…[it] gave Capra a shock of recognition: here was the conflict he had sensed by had only vaguely understood in himself, between his slick con man’s ability to make a buck by manipulating mass emotion and his nagging sense that he ought to be devoting his talent to a higher purpose.”***

The hierarchy of vocations is not a Biblical invention. In Jesus’ parable of talents, he seems more concerned that we are investing them, rather than which ones we have, or how much. And that we are investing them in kingdom come, on earth as it is in heaven. “The question [Miracle Woman] implicitly raises is whether imagination can successfully change reality,” writes Carney, “whether the self can gain in possibilities of expression by such theatricality.” Anyone who has ever imagined knows that it can, and we can; the Creator responds to creativity. “When I’m out there talking to those people I’ve got to make it seem real or I can’t put it over,” Florence argues to Hornsby, who counters, “You’ve got me worried. You’re beginning to fall for your own ballyhoo.”

Capra frets about this real ballyhoo in his autobiography: “did she or did she not herself [Florence] believe those ‘inspiring’ sermons?…I didn’t know, Stanwyck didn’t know, and neither did the audience.” But Stanwyck remembers it differently: “I never felt that, not at all.”**** Neither did I. Miracle Woman was one of Stanwyck’s first leading roles, and indeed, the ecstasy of the film is watching a performer answer their calling, and keep answering, no matter how good or bad the reception is.

*All Frank Capra and Robert Riskin quotes are from Capra’s autobiography, The Name Above The Title, The Macmillan Company, 1971.

The 2003 film Oldboy (Oldeuboi), a Korean production directed by Park Chan-wook, is one of those disturbing explorations of humanity that leaves you with something akin to a post-Lynchian (good…