Let the Right One In is a foreign, art-house, vampire film starring a bunch of weird-looking Swedish kids. But also it’s a haunting look at isolation, childhood trauma and intimacy somewhere in the hazy realm between friendship and first love. Stark and matter-of-fact about its subject matter (Swedish vampires), this minimalist film was good enough that it led to a much more stylized, suspenseful and gory American remake. If your Halloween is incomplete without vampires, I highly recommend the original if only for its weirdness and the questions it raises about its very human subjects.

Oskar (Kåre Hedebrant) lives with his mother in a working-class, high-rise apartment complex. I don’t know if it’s always winter in Sweden, but this movie is cold. The apartment is all hard angles and white walls, everyone’s bundled up all the time, and there appears to be not much to do but wander around in the snow. Oskar, a lonely, bullied 12-year old spends his days being bullied and his evenings being lonely – standing in the snow-covered courtyard enacting fantasies of fighting back. It’s interesting to see a portrayal of a bullied kid who is both constantly traumatized and deeply set on violent revenge. He’s about as powerless a protagonist as you’ll see – slight and weak, 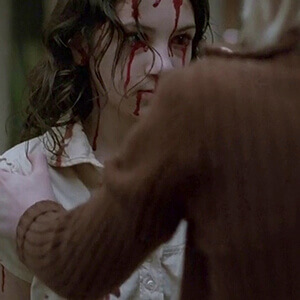 caught in a nebulous zone of pre-pubescent helplessness where all the other kids seem bigger and meaner. He’s the perfect target for a hungry vampire.

Eli, played with subtle inhuman pathos by Lina Leandersson, moves in to the apartment next door with her “father”. She suddenly appears one night standing atop the unused playground equipment. Barefoot in a thin dress, stringy black hair, hollow-faced, when Eli shows up it’s unclear what her intentions are with Oskar. He certainly doesn’t understand that he’s in the presence of a supernatural killer initially. His dawning realization of that as the film goes on is strangely portrayed but becomes a key to understanding both children. Oskar’s need for intimacy and the recognition of her raw power quickly outweighs any misgivings he might have over her need for blood. As their friendship develops, Eli becomes more human in her reactions. Each has something the other desires, but neither understands nor are they able to take hold of it – for Oskar it is the ability to control his own life and for Eli it is the innocence of childhood.

Håkan (Per Ragnar) is the older father-figure who lives with Eli and is kind of her Renfield. He spends most of the film looking for young victims to feed Eli’s hunger, to varying degrees of success. He’s as impenetrable as the Swedish night – though he seems to hold some love (or enthrallment) for Eli. In the end he’s just another of her victims, used and discarded. It’s strongly implied that the blossoming relationship between Eli and Oskar is doomed to end the same way, but that is open to interpretation. 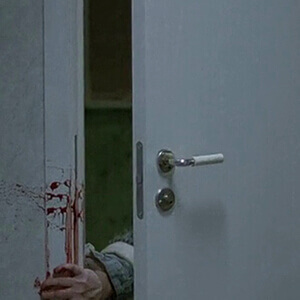 This is definitely a horror film. The vampire transformation scenes are not the high-gloss CGI American audiences have come to expect, and that makes them all the more creepy. In fact “creepy” and “weird” and “unsettling” might be better descriptors than “horror” for Let the Right One In. The sudden bursts of violence are filmed with a steady realism. When Eli kills, she becomes a feral hunter save one terrifying scene of ultimate revenge against Oskar’s bullies. Eli’s vampiric powers are portrayed as both other-worldly and animalistic; she’s strong enough to climb three floors up on the outside of a hospital, but weak enough to be kicked off during an attack by an adult bystander. In her child form she’s vulnerable, which is why she needs a caretaker.

If you’re a fan of vampire movies like The Lost Boys or stories like Salem’s Lot, the Swedish Let the Right One In will be a good fit. It’s dark and austere and not even a little bit funny, but the trade off is a story that mixes realistic human desires with supernatural undertones in a fantastic creepy-weird container.

Whiteness in America, Michael Eric Dyson writes, is the result of “breaking down or, at least to a degree, breaking up ethnicity, and then building up an identity that was…