I never planned to review Alfonso Cuarón’s Children of Men. My hope was to review the new movie Son of Saul just in time to make sure the holidays didn’t get too cheery, but alas we here in Milwaukee have to wait until February to ruin our night. In the meantime a friend crashed at my place and we decided to top the night off with the film Children of Men. It had been a while since I’d seen Cuarón’s take on the dystopian British drama and I was struck by two things. First, that this will be the last time my friend lets me pick the movie; and second, how appropriate the film is to our time. Both our political climate characterized by the xenophobic rhetoric of Trump; rising Islamophobia; a refugee crisis across Europe, Africa, and the Middle East; and our position on the church calendar (Advent) made this film seem like it was made for today.

Hope in a Hopeless World

In short the plot is the potential salvation of a hopeless world by the birth of an impossible baby. Expanded a bit the story begins in a not-so-distant 2027. For 18 years no children have been born and as the film opens the world’s youngest person is killed by a crazed fan for refusing an autograph. The sky is overcast as Theo (Clive Owen), the protagonist, strolls out of a café and it explodes into dust and smoke. The world is falling apart and people are fighting all the harder for the scraps. 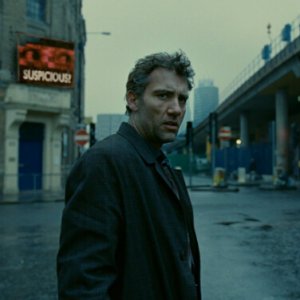 Through it all Britain continues on, extolling its population that they alone are the civilized ones left in the world and soon, after the resistance is stamped out and the refugees deported (or at least disappeared), they will be even more the city on a hill that they already are.

Theo would have carried on as well, but he is soon kidnapped off the street by the aforementioned resistance who are led by his ex-wife Julian (Julianne Moore). Strangely enough it’s not café bombs they want his help with but transportation papers to the border (apparently that’s necessary). Theo initially refuses but then pulls some strings and to his surprise discovers the travel papers are for a young fugee (refugee in their parlance) named Kee. Not just any fugee but a pregnant one. The first pregnant woman worldwide in 18 years.

Julian believes that a near-mythical group called the Human Project exists and will not only protect Kee, but use her baby to help humanity bear children again. So off they go, Theo, Kee, and Miriam (Kee’s midwife) chancing their lives on a myth. Pursued by armed assailants they flee first to a friend of Theo’s (Michael Caine), and then into a refugee camp to get Kee to the Human Project by any means necessary.

Knowing nothing about the book this film was based on, certain circumstantial connections to Advent seemed tenuous but undeniable. Kee reveals her pregnancy to Theo in a barn (the usual location of the Nativity). Later when Theo asks if Kee knows who the father is, she jokes that she is a virgin. Upon the arrival at the camp, the angel Gabriel is invoked for protection, though he is most known for his role in the annunciation rather than as a protector. The birth takes place in a refugee camp (perhaps reminiscent of shepherds, outcasts, being the first to witness the birth of Jesus). Finally, for one magical moment, when people first witness the baby many make the sign of the cross and the liquidation of the camp surrounding them ceases, if only for a moment. 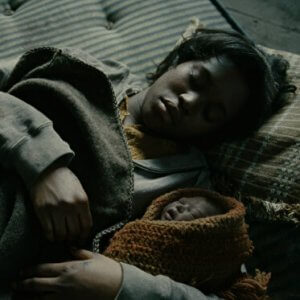 Apparently the book was more saturated with references and Christian themes than the movie. There’s a rather negative review documenting those changes here. Though it’s understandable for a fan of a book to be frustrated with a loose translation (let those of us who haven’t said “That didn’t happen in the book!” cast the first stone) I think the political path taken by Cuarón makes the movie more powerful, not less. Even if Cuarón has a clear agenda, his references to Abu Ghraib, Guantanamo, mass deportations, a refugee crisis, fear of immigrants, and nationalism run amok – blended in with the Nativity story – raises several powerful questions.

Questions such as: What is the power of hope? Was Jesus born to deal with issues like Guantanamo? What do Jesus’ family and his first witnesses tell us about who he (and therefore God) is and cares about? What would keeping this kind of Christ in Christmas look like? Is this film such a stretch after all?

However you look at it, the heart of the plot is the coming salvation to a hopeless world by the birth of an impossible baby. While you could say the film is an inversion of the Christmas story*, I think a better case is made that this is a sort of Nativity in modern dress. Is anyone saying Kee’s baby is the Daughter of God? No. That said, something about this baby awakens hope in otherwise hopeless people. Something about this baby inspires people to sacrifice the lives they otherwise cling to. Somehow this helpless newborn’s cries rebound over a battlefield and cause the bullets to cease, if only for a moment (even Jesus didn’t stop the massacre in Bethlehem). If I’m honest, it’s only a baby that makes those kinds of differences, that impacts the lives of those kinds of people, that is truly worth waiting for.

So if you’ll allow I’d like to do a post-Advent benediction. Through the new year, may we wait well for the coming of the one who brings hope to the hopeless, who promises to turn pistols into ploughs and droids into darning needles, the man who gives his life for those who want to take his. As we wait, may we hear echos of this God in our world, may we see Him in his people, and may we taste more like Him when we arrive at Advent again.

*“That the future hope of humanity lies with a woman, her daughter, and an alcoholic former political activist can be read as an ironic inversion of the Christian iconography that appears in the film’s pseudo-Nativity scenes.” Ethics, Aesthetics, and the Future on Alfonso Cuaron’s Children of Men

Nathan Self is the intern of Much and Little at Transformation City Church, a multi-ethnic community in the heart of Milwaukee. In his free time, he loves to find glimmers of theology in movies, books, and music, and has only recently written any of them down.

Latest Posts By Nathan Self

Have you ever had a moment so overwhelmingly emotional — chaotically sensory even — that you don’t know what to do when it’s over? If not, try to imagine one….