In David Robert Mitchell’s It Follows, a young woman named Jay (Maika Monroe) has a sexual encounter with her crush, Hugh (Jake Weary), only to find that he has a dark secret. He is followed by a supernatural force, the titular “It,” and the only way to keep “It” from killing is to pass “It” on to someone else through sex. To make it worse, “It” appears in different human forms, often as a friend or family member of one of the characters. “It” walks slowly toward it’s target, whoever is the latest on the list of sexual partners, “It” has one goal: to destroy that person.

It Follows is not your average American horror movie where only the virginal survive. Disturbing and smart, it explores the connection between sex and death. The camera work and the pacing of the story leave the viewer in a constant state of awareness, always alert, looking for who and where “It” could be.

The film tells it’s story deftly through long, slow shots and a brilliant soundtrack, avoiding heavy-handedness by keeping “It’s” backstory a mystery. The themes of sex, trauma and death are handled with brilliance and compassion. It Follows sets a new bar for American horror.

TRIGGER WARNING: This article deals with rape and sexual trauma.

“It” Passed on Through Rape

Many, (though not all¹) reviews have called this a cautionary tale for teen sexuality or an STD fable. But most have passed over that “It” enters Jay’s life through what is essentially a rape scene. Jay is on a date with Hugh when they end up in the backseat of his car parked near an abandoned building where they have consensual sex. Afterward, she lies on her stomach in the backseat in her underwear, telling Hugh that she used to dream about going on dates as a kid, holding hands with some cute guy in a car, picturing freedom. While she talks, Hugh crawls on top of her, kissing her before he interrupts her monologue by covering her face with a chloroform-soaked rag. For an excruciating twenty seconds, we watch Hugh pin her down with his body while she struggles underneath him and tries to cry out through the rag. 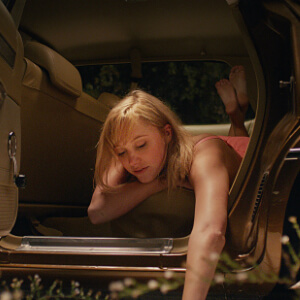 Perhaps the reason everyone is so hesitant (or oblivious) to calling this a rape scene is because the intercourse is consensual. USA Today’s Brian Truitt goes so far as to blame Jay for the encounter, saying, “Jay [is] a college-age girl whose date Hugh . . . freaks out in a movie theater . . . That should be the first warning to run far away, but instead a subsequent sexual encounter in a car between the two ends up with Jay being held captive.”² Notice that in Truitt’s reading there is no mention of Hugh performing the capture, but only a cause and effect started by Jay: he claims she doesn’t see the signs and so she “ends up” being held captive.

But Jay’s consent to one sexual act is not universal consent for Hugh to use her body for his own purposes. Jay wakes up in her underwear, terrified and tied to an old wheelchair in an abandoned building while Hugh darts around her with a flashlight, waiting for “It” to show up, the “It” he has passed on to her. The visual logics of the film: Hugh restraining Jay with his body, drugging her, tying her up, and using her, scream “rape,” even if the sex itself was consensual.

“It” as Sexual Trauma

Victims of sexual abuse will tell you that sexual trauma follows you. It affects your relationships just like “It” effects Jay’s relationships with friends, family and future romances. Sure there are certain ways to try to distance yourself from it (and “It”). Promiscuity is often a coping mechanism in rape trauma syndrome as an attempt to take back control of one’s body, and we see Jay try this. She has sex with strangers on a boat in order to distance herself from what follows her. “It” will have to kill them before it can come after her again.

Just as the PTSD from sexual trauma affects friends and family members of victims, it is not just Jay who suffers in It Follows. “It” can only be seen by those who have had sex and caught “It.” But “It” can still (and does) hurt those around Jay who cannot see it. At one point Jay’s sister explains to her that she believes that something has happened to Jay, but she can’t see it and doesn’t know how to help. This is often the case for persons who love and care for victims of sexual trauma.

The Burden of Sexual Trauma and the Church

But victims of sexual trauma can and do have meaningful friendships and romantic relationships. We see this in the character of Paul (Kier Gilchrist) who has been in love with Jay since they were children. At first, Jay has no romantic interest in Paul. But Paul, along with Jay’s  sister and some other friends, persists in Jay’s battle against “It.” Eventually Jay finds she does care deeply for Paul and sleeps with him even though both of them know that means “It” will be passed on to him.

The closing shot of the movie shows Paul and Jay walking down the street holding hands, with something walking slowly behind them. It could just be another human being, or it could be “It.” It is an ominous scene, to be sure, but after watching Jay struggle with “It” by herself the entire movie, there is a whisper of hope that at least they are not alone. Paul and Jay have agreed to share the burden of “It” and, although It follows, they can face it together.

The universal church can learn something from Jay’s friends. Far from sweeping sexual trauma under the rug or excusing the perpetrators, perhaps the most gracious and loving thing we can say to those who have suffered sexual abuse is just what Jay’s sister and friend say to her, “I may not understand, but I believe. And you are not alone.”

¹ Natalie Wilson, Ms. Magazine Blog. “’It Follows’: A Horror Film That Doesn’t Blame the Victim for Having Sex.”
² Brian Truitt, USA Today. “Sex Leads to Nothing Good in ‘It Follows”

Lindsey Joyce has always been drawn to story and alternative expressions of faith. After attending Duke Divinity School, she pastored a rural church and led an intentional community. Currently she pastors a church in urban Oak Park, IL and lives with her husband, Adam.

Few names in Hollywood carry with them event status. Jordan Peele is one of them. Ever since the first trailer dropped in February, Nope was marked as the event of…