If you could be any animal, what would you be? That’s the question that will be zinging around your brain as you watch The Lobster. Perhaps it’s the first time you’ve given it serious thought. Not so for the inhabitants of this dystopian universe. In the world of The Lobster, society is so obsessed with couples that single citizens have 45 days to find a mate or they’ll be turned into the animal of their choice.

If the Oscars gave an award for best logline, that one would win hands down. One sentence was enough to get me sold on the film. I’m assuming others felt the same, as this strange film from Ireland has already grossed $5 million. That’s pennies compared to a blockbuster, but pretty good for a movie that has zero appeal to mainstream American audiences.

I wonder, though, what the filmgoers who made up that $5 million had to say when they left the theater. This is an appealing movie from a distance, but a tough journey to the end. I’ll bet even the art-house crowd had trouble with this one. I’ve seen a lot of disturbing films, but The Lobster pinched its way right under my skin.

David knows what animal he wants to be if he “doesn’t make it” – the term the characters use for those who can’t find a mate in time. He wants to be a lobster for pragmatic reasons. Lobsters live to be 100 years old, they’re always fertile, and David loves the sea. 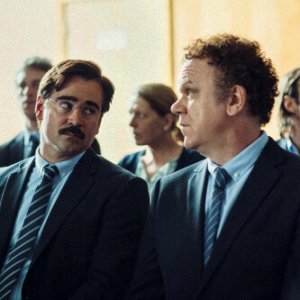 We first meet David as his wife announces the end of their relationship. His face is blank. His face is always blank. Colin Farrell gives a master class in understatement here. David dutifully makes his way to the hotel/prison reserved for the suddenly single. Each morning he wakes up to an announcement of how many days he has left to find a companion.

The staff running the hotel are constantly reminding everyone of the superiority of couples. They enact bizarre plays such as one where a man chokes on food and dies alone, followed by a second version where the man has a wife there to save his life. The singles certainly put forth an effort, but can love take root in such forced circumstances?

The hotel manager tries to put David at ease on his first day. She says, “Now the fact that you will turn into an animal if you fail to fall in love with someone during your stay here is not something that should upset you or get you down. Just think, as an animal you’ll have a second chance to find a companion. But, even then, you must be careful; you need to choose a companion that is a similar type of animal to you. A wolf and a penguin could never live together, nor could a camel and a hippopotamus. That would be absurd.”

The line is funny because the whole movie is absurd. How could society get to this point where single people are treated like criminals, and the animals that roam around us are former humans punished for not finding love?

All of this works for a while. Writer/Director Yorgos Lanthimos channels a surreal, pitch-black comedic tone for the first hour. It’s like Napoleon Dynamite meets Charlie Kaufman. I laughed out loud several times, as did much of the theater. The cast nails the deadpan delivery that’s required here, especially Farrell.

But at some point I stopped laughing, and so did everyone else. The story takes progressively darker turns until the acidity of this dark roast began to make my stomach turn. Animals die and people die, and the living eat each other alive. David eventually finds his way into the exact opposite community of the hotel, where the loners live in hiding. Their leader has just one rule: no romance. People caught flirting or kissing are given cruel and unusual punishments.

The hotel forced people into relationships. The leader of the loners bans it. This raises very interesting questions about love, though I don’t know if Lanthimos is interested in answers. There’s an overwhelming misanthropy to his work. This is a film about horrible people doing horrible things to themselves and each other. The writing is razor-sharp, but be careful; Lanthimos cuts deep and he’s not afraid to leave a mark.

I had the pleasure of attending The Lobster with my podcast partner, Tim. We talked after the movie about the film’s exploration of love. The way we’re dishonest in our attempts to attract others. The way relationships are stagnated by our artificial constructs. The way love is bound up in the incarnation as God emptied himself for us.

I experienced both community extremes of The Lobster during my Freshman year of college. My first month wasn’t too far removed from the hotel in the film. There was enormous pressure to couple-up. I felt it the minute I walked on campus. This pressure begins far before college in our Christian communities, but it’s intensified by the university setting where independence meets opportunity. 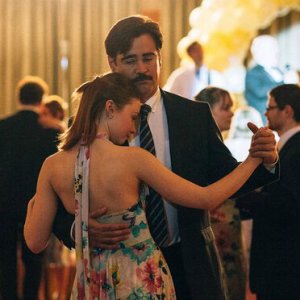 The Apostle Paul thought being single was better than marriage (1 Corinthians 7:8), but it’s rare to find that opinion in the Church today. Men are trained early on to be future leaders of their families. Women are taught the importance of motherhood and homemaking. Being single is hard enough without the spiritual guilt that comes from attaching ultimate worth to family life. Does God call some to singleness? The Bible certainly says so. We need to make room for that calling in our theology and relationships.

I found love just a month into college. That’s when I experienced the other camp: militant singleness. Several of my friends were annoyed at my newfound relationship. And to be fair, we were annoying. But the bitterness against us surprised me then, and it surprises me still. Some people can’t stand couples. Grace is needed on both sides of the aisle.

The Lobster caused me to ponder these things. Still, there are less ugly ways to arrive at these reflections. What The Lobster desperately needs is a moral center; a light to shine through the darkness. Tim found this in the central relationship that forms throughout the film, but that wasn’t enough to remove the bad taste in my mouth. There are no heroes here, and even love makes such hideous demands.

The highest compliment I can pay to The Lobster is that I’ll never forget this film. Lanthimos taps into a part of the mind that’s sticky, but not entirely healthy. In one scene, a woman comes to her last day in the hotel. She’s given a choice of one more thing to do before being turned into an animal, something she can only do as a human. She chooses to watch her favorite film: Stand By Me. The next time we see her, she’s a horse. Former acquaintances pet her and wave at her as she gallops away. The scene is fascinating but macabre; interesting but perverse. I can’t stop thinking about it, but I want to.

There is a lot to admire in The Lobster from an artistic standpoint. The cast is impeccable, the writing is clever, and the world is unique. Still, I left the theater hollow, hating everyone in the film and glad to be leaving. Tim asked me afterward if a movie has to be satisfying to be good. I think it does. Good stories demand a flicker of light; a glimpse of hope; a promise that good will triumph in the end.

The Lobster is all head and no heart. Lanthimos built a permanent home in my brain. But why did he pick the darkest part?

We all have been there… stuck in the maze of some type of bureaucracy trying to figure out where we go next. In this day if we are technically adept…